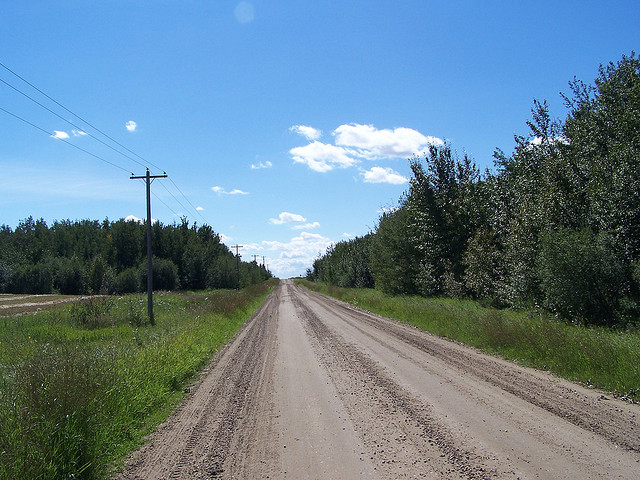 Is it better to continually maintain gravel roads or will paving them be more cost-effective? Both gravel and paved roads will require maintenance, but gravel roads installed and maintained using proper techniques and the latest materials may be a much better option than they were in the past. Old paved roads can be an expensive problem especially when pothole after pothole needs to be filled. The steep cost of maintaining and rebuilding asphalt roads means that many towns and counties turn to cheaper alternatives. Gravel roads are particularly popular in rural areas because cost is a gravel road’s primary selling point.

For counties such as Lethbridge, in Alberta Canada, with many gravel roads that were built when farmers were using wagons and horses, the maintenance of gravel roads can be especially challenging, according to Lethbridge Herald. Increasing heavy load traffic usually causes numerous problems for these old roads that were not designed with today’s transportation demands in mind. As a result, Lethbridge County has found itself in a dilemma in deciding what to do with its gravel road network. Kevin Viergutz, director of Municipal Services for Lethbridge County, recognizes the issue as one needing continual attention. “Frequent hauls and heavy weights cause the roads to pound out and spread out. Over time, roads require frequent grading, gravelling and reconstruction. The roads lose their crown resulting in water standing on the road and not draining which creates further damage.” One solution the county found came out of the trial of a different type of gravel that was calcium-stabilized. If the gravel is found to be successful, Lethbridge County would agree to use it on all haul roads for the price of roughly $7 million.  The county found the cost of purchasing, building and maintaining the new gravel roads with this type of gravel for a 30-year lifecycle would total around $49 million. Alternatively, paving the roads and maintaining the same haul roads over a 30-year lifecycle would be dramatically more expensive, costing the county $145 million in total.

Gravel roads, of course, need regular care just like their paved counterparts do. One of the biggest maintenance issues that arises from use is dust control. Dusty roads can be dangerous, a nuisance to neighbors and a general source of annoyance for those using them. A dust control system can help control the massive levels of dust created by these roadways. Dust control systems are recommended to be used on roads with a 4% crown on the driving surface and a good quality gravel. A substantial amount of problems on gravel roads are caused by poor gravel choice. For instance, it’s important to know the types of vehicles that will be used and at what speed in order to pick the type of gravel that will generate minimal dust. Midwest Industrial Supply offers a range of dust control products and services, all of which are certified environmentally safe. Midwest’s solutions have been used to control dust pollution on everything from helipads and landing zones to heavy traffic haul roads. For workers at a work site, impaired visibility can lead to miscommunication and sometimes accidents. Employees with respiratory problems can have difficulty breathing and working in areas with dust-saturated air. With Midwest’s dust management products, employees will be able to see and breathe more easily so they can perform at their best.

It’s easy to see the conversion of paved roads back to gravel roads as a step backwards. Indeed, funding cuts often force companies to convert to gravel rather than re-paving old roads. But the cost of upkeep for gravel roads can get out of hand, especially for haul roads with lots of high-tonnage traffic. That is why it’s essential that these transportation routes be built with a stable road base to avoid rising costs later. You can depend on Midwest for quality gravel haul road installation and maintenance technologies. Our stabilization techniques ensure that this vital part of your infrastructure is always up to whatever challenge you give it.