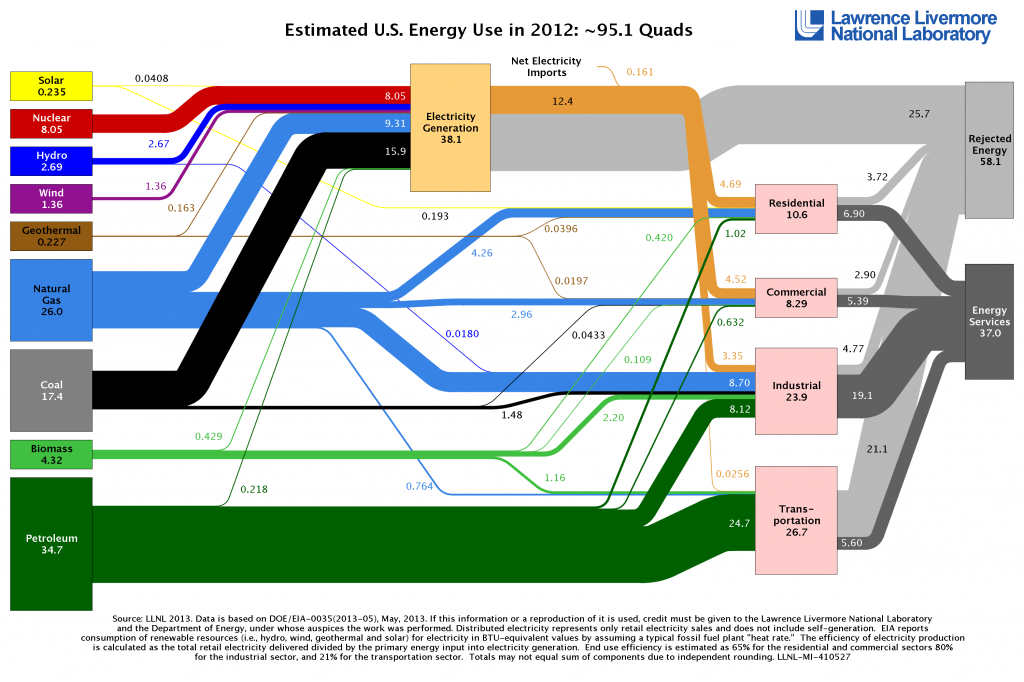 In the US, the energy market can be split up into three tiers: Coal and natural gas are the major drivers of energy, while nuclear power comprises the entire second tier and solar and wind power make up the third.

However, US citizens take for granted what the first tier offers in terms of existing energy supply, as well as the technical hurdles new energy technologies–like solar and wind–must clear before joining the mainstream.

Wind power, for example, shows promise as a viable, alternative means of powering the nation. However, the windmills best equipped to furnish cities with power only operate at 4% efficiency, rendering the present technology an impractical option for providing the amount of power required by the country’s biggest metro areas.

As you can see in the below graph from the US Energy Information Administration (EIA), the expectations for renewables’ impact on long term energy production is growing, though still only a small portion of the overall picture.

Energy production–measured in quadrillion Btu (Btu=1055 joules)–is required to increase considerably to keep up with the United Stated demand for energy. This implies that all sources have to grow to sustain our thirst for energy as a society. This fits with my agreement that U.S. policy should focus on an “all the above” energy policy.

You can learn more by visiting the EIA website.

Last week, a major coal producer–one who is generating 10% of the country’s entire supply of coal power–told me about how his brother, who went to MIT and lives in California, commented on the simplicity of switching to renewable energies and how this switch needs to be made due to all the negative press the coal industry is receiving.

His story highlighted how even extremely intelligent people sometimes don’t get it. Another informed person told me that no one understands that any energy source, be it nuclear, coal, natural gas, solar, or wind, must unfailingly provide a baseload to remain viable.

What he means exactly is that the supply of coal and natural gas will always meet the country’s minimum energy demand, whereas solar or wind are beholden to a number of unpredictable factors–such as the number of windy or sunny days within a given month–and cannot guarantee a supply that meets standard demand.

If you can store and transmit a particular energy supply, you can push it to where it needs to go. Renewable energies aren’t yet advanced enough to baseload, meaning that every transport of supply brings with it a loss in efficiency.

By contrast, in North Dakota, the Bakken shale plant is disposing of its gas in a controlled (albeit controversial) manner because an adequate storage and processing infrastructure doesn’t yet exist.

The amount of material currently available is 100 times greater than the plant’s ability to process it, presenting an issue that must be addressed immediately. In other words, if we put our efforts and resources into expanding our capability to produce coal and natural gas, the country will benefit from the resultant abundance.

And it’s not only about providing the American people with energy. Coal and gas also play big parts in the mining industry–particularly for iron ore, copper, nickel, and gold. Together, these materials form a significant part of the U.S. economy, as they are processed into components for devices we all depend upon and even love (think cars and smartphones).

The US Was Built on the Backbone of Coal

Recently, we as a country have experienced a major change. Five years ago, we thought coal was our only domestically available resource and believed we would have to start importing gas from the rest of world–namely, Europe, South America, and Canada. However, we now know that reinvesting in the coal industry can boost our natural gas supply.

According to some estimates, we have the ability to produce coal-based energy for another 100 to 200 years, with much of the supply locked up in government-protected land. By granting access to these coal reserves, the government would also open up the necessary quantities of natural gas, as many coal beds contain bountiful hydrocarbon reservoirs.

At the same time, the country is producing more oil, drastically decreasing our previously heavy reliance on the supplies offered by Saudi Arabia, OPEC members, and other oil-rich countries. The U.S. recently surpassed Russia in total oil production–a major milestone in our quest to reduce dependence on international sources to satisfy our energy needs.