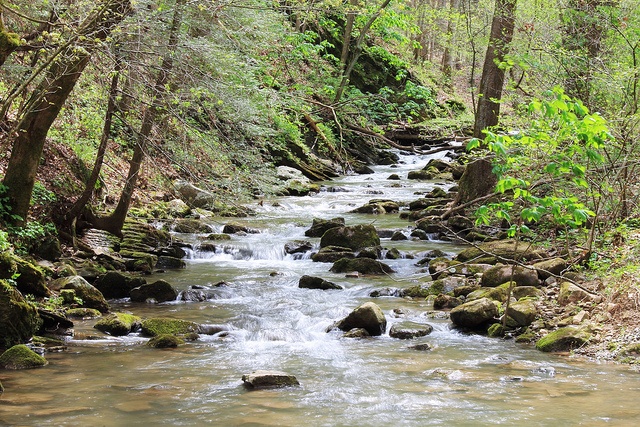 A 1984 film depicts swathes of farmland being eroded away by the Holston River. Now, for the residents of Hawkins County, that fiction has become an unsettling reality.

Laurel Run Park in Hawkins County–more specifically, Kingsport, Tennessee–was the backdrop for The River, a 1984 film starring Mel Gibson and Cissy Spacek. The film tells the story of a family and its beloved farm property suddenly threatened by erosion on its riverside location.

The fictional farmers end up reclaiming their farms with sandbags and sheer grit (literally)–today, it’s unclear if such efforts would be enough to save Laurel Run Park from the very real threat of river erosion.

Since the film’s release, Laurel Run Park has become a jewel of Hawkins County, as well as of the entire state of Tennessee. It draws people in from all around the area, especially hikers. Appalachian Treks features it as one of the country’s most scenic hikes, with three waterfalls and abundant wildlife. The park also has facilities for fishing, sports games, picnics, and outdoor performances.

But now that the Holston River is eroding the banks of the park, the land of this valued landmark is slowly falling into the waters below.

Private property owners both upstream and downstream are uniting to take action. A park official told the Times News that one owner had $27,500 worth of shoreline erosion prevention work done just to protect a mere 270 feet of land.

The county has not secured a grant so far, however, and the river will likely overtake private property owners’ efforts if more state funding isn’t directed towards this crucial effort. As a publicly-owned space, the park relies heavily on donations.

The county, however, is seriously considering going into reserves to install about $55,000 of two-inch-thick asphalt for internal park roads. The road leading to the park is also in poor condition, even taking a toll on some private vehicles, according to the Times News.

Midwest Industrial Supply, Inc.’s soil stabilization products can help to preserve the shoreline at a much more affordable cost. Midwest provides a wide range of products to suit unique situations and needs,and in the case of Laurel Run Park, Soil-Sement® would provide a particularly effective solution. When sprayed on the site, Soil-Sement cures and creates a cohesive surface with premium weatherability.

Laurel Run Park is a gem, treasured by local residents and out-of-towners alike. With the right amount of funding, and with soil and road stabilization from Midwest, we can reclaim Laurel Run Park the same way the heroes of The River did 30 years ago. After all, real life doesn’t always have to turn out worse than the movies.