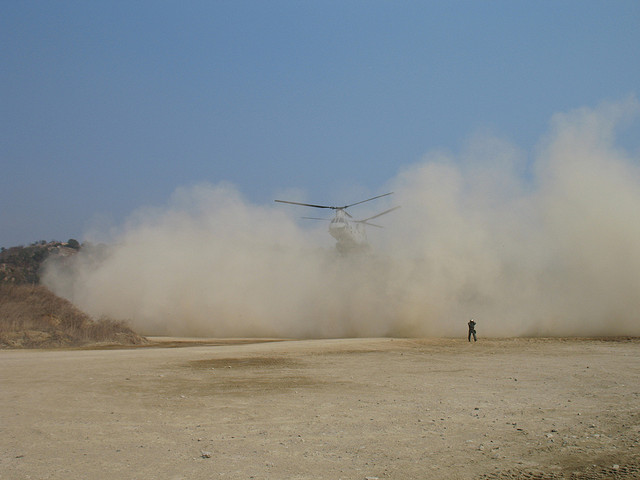 Needless deaths occur when airfield dust is not effectively dealt with, as highlighted by a recent MV22 Osprey crash at a U.S. Air Force Station in Hawaii.

These are things no helicopter pilot wants to hear, as they’ve been the principal factors behind the majority of U.S. Military helicopter crashes this century.

Brownouts occur when large rotary wing aircraft are forced to land in excessively dusty areas. Wind from the rotors disturbs the dust and sends it billowing into the air, causing a loss of visibility and orientation and creating the potential for disaster.

This issue is often unavoidable when pilots find themselves landing in and taking off from unknown terrain while under pressure from enemy troops.

But aside from situational training exercises designed to teach pilots to deal with or utilize brownouts to their advantage in combat scenarios, there’s simply no excuse for them in a controlled landing environment.

The Most Recent Case

A potential case of brownout in Hawaii recently killed two marines when a V22 Osprey approached its landing site with too much downward velocity, according to KITV. Upon its descent, a large cloud of dust was generated by the high winds from its rotors, at which point the pilots apparently lost control of the aircraft.

Although the military has yet to confirm the official cause of the crash, all signs seem to indicate that the deadly incident was due to a dust-related loss of visual orientation.

While the crash remains the subject of an official investigation, the mere chance that the dust cloud was a contributing factor is unacceptable. There’s just no excuse for brownout-conducive conditions on any controlled airfield. It simply isn’t worth the risk.

The military has been developing technological aids against brownouts, such as Helicopter Autonomous Landing Systems (HALS), which use high-frequency radar sensors to paint a picture of the ground and any objects close to the landing area for pilots. But despite the assistance these tools provide, they by no means represent foolproof solutions.

The only way to make sure that a brownout won’t interfere with a pilot’s ability to fly an aircraft is to prevent the occurrence of brownouts in the first place.

The key to avoiding these kinds of tragic accidents lies in effective landing zone preparation. Midwest Industrial Supply, Inc. has provided safe and effective dust control solutions to clients across the globe for over four decades, including for military operations. Their comprehensive range of equipment and methods include:

Contact Midwest today for an in-depth assessment of your environment and its dust control needs.