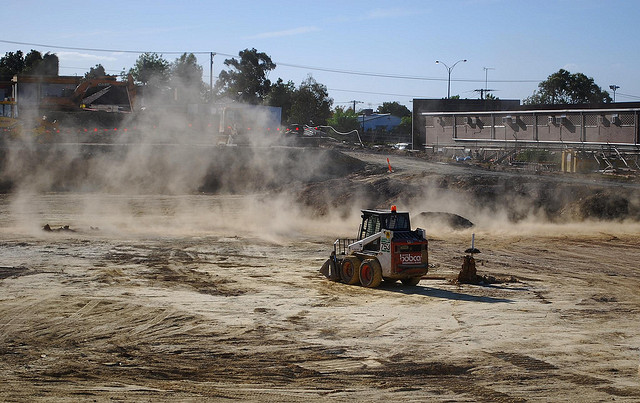 High winds are limiting the pace of sensitive earth-moving operations at an old FMC phosphorous plant in Fort Hall, Idaho. Better dust control could prevent harmful dust particles from getting into the air, and provide a more efficient solution across the board.

FMC has always been involved in a wide array of heavy industries, and its Fort Hall, Idaho, location once housed a major elemental phosphorus production site — one that ran from 1945 to 2001 and generated a total revenue north of $100 billion.

In June 2013, however, the company was ordered to clean up the site. The EPA is now overseeing these operations, which began the following year and are still currently in progress.

The site is a particularly sore spot for the Shoshone-Bannock Tribes, whose members believe that the site should be fully cleaned up rather than merely covered over with unpolluted soil. The capping with fresh soil is supposed to slow the leaking of contaminants into the ground and stem the flow of runoff water, but the Tribes are strongly opposed to the entire operation, claiming it doesn’t do nearly enough.

To further exacerbate the situation, high winds are forcing cleanup crews to wastefully spray water all over the site to prevent dust from being blown about. However, far more effective and efficient methods exist.

According to the Idaho State Journal, Kelly Wright, the environmental waste manager for the Tribes, says that operations should have been shut down to prevent the spread of air pollution when winds reached speeds of 50 mph. They continued unabated, however, with workers instead using water spraying techniques to control the dust.

As a result, all air masses within a 100-mile radius of the site are at risk of being polluted. According to a Pocatello environmental official, the level of contaminants in the air throughout the period in question was in line with EPA regulations, yet some could have still harmed small pockets of nearby residents and workers.

Although they can help, water spraying techniques alone don’t offer the ideal solution. The inherent surface tension water creates means that it can’t easily absorb dust particles, and what little dust it does absorb is released once the water evaporates.

Moreover, colossal amounts of water are required to effectively quell dust on even a short-term basis, and it can be difficult to move and spray such large amounts within the required time frame.

So What’s the Ideal Solution?

The ideal solution in this case would involve working under windless conditions with a specially formulated and environmentally-friendly dust suppressant. Even in excessively windy conditions, it’s possible to effectively control dust at the source.

At the FMC site, for example, such a system would entail a tried-and-tested dust control solution from Midwest Industrial Supply, Inc., the likes of which range from road, bunker, and load-topping sprays, as well as material handling dust elimination sprays.

Water savings aren’t the only benefit, especially in cases like the FMC phosphorous site, where large quantities of earth are being moved and shifted, kicking up hazardous dust into the air. In these instances, the other significant benefit is the solution’s increased dust-fighting power, as it traps and suppresses dust for far longer intervals than water spraying can alone.

Contact Midwest today, and together we’ll develop a tailored solution to your dust problems.