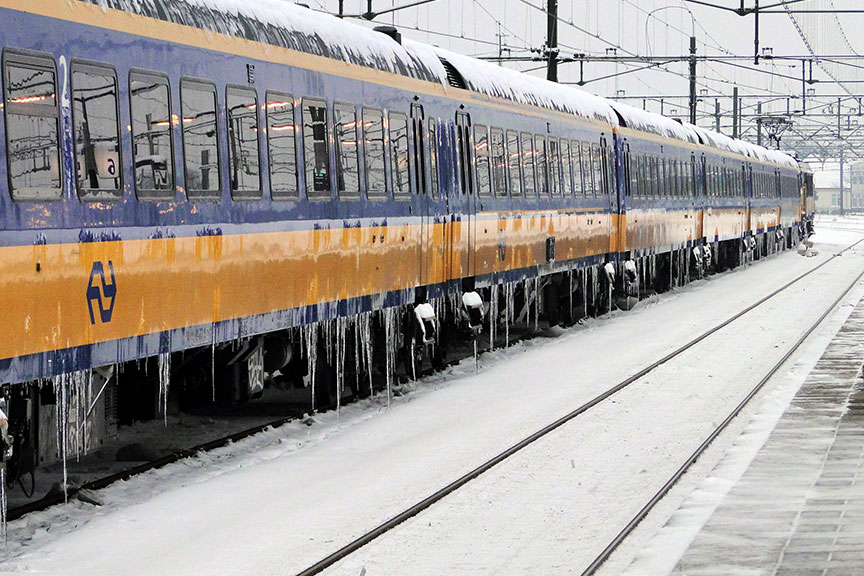 But by far the worst, and most expensive, cost of winter weather are accidents, with the accompanying losses in injuries, fatalities, freight and damages to trains and railroad equipment.

Accidents, some 75% of which are derailments (with the others being collisions, obstructions on the track and miscellaneous), rack up millions in damages and continue to be relatively common.

Today’s article will cover the impact of these accidents, with an emphasis on the 18.5% of accidents that are caused by snow and ice. We’ll conclude by recommending a method to more effectively alleviate the threat of snow and ice.

A Case Study on the Impact of Weather on Rail Transit

In a previous article, we discussed the financial impact that severe winter weather can have on railways. One of the stories we referenced was of a train derailment in Canada that killed the entire crew of three. While the cause of the accident had to do with the impact of cold temperatures on old brake lines, rather than ice and snow, the story highlights the tragedy that harsh weather can create for trains.

First, the decade from 1995-2005 saw 861 accidents that were specifically linked to severe weather conditions. Of these, derailments made up the largest category by far, as the consequence of 660 accidents. Derailments also accounted for the vast majority of “secondary consequences,” with 60% of all fatalities, over 98% of all injuries, nearly 95% of released hazmat material and 100% of all evacuations. They also accounted for over 89% of all damage costs. (“Damages” are limited to equipment, tracks, signals, ways and structures, and do not include freight.) The average cost of damages per incident was nearly a quarter million dollars.

Second, over half of all derailments were caused by heat, liquid precipitation or frozen precipitation. Which specific cause was primary depended on season: ice and snow were the most frequent type of causal event from December through March.

Across the winter months, ice and snow resulted in 160 total accidents, 18.5% of all incidences. While there were no fatalities due to ice and snow conditions, these events did result in 12 injuries, 1% of all injuries from weather-related accidents.

The Effect of Ice and Snow on Train Operations

Traditional approaches have largely relied on switch heaters and manual removal of snow and ice to try to minimize the risks of accidents. Deicing liquid is used to melt ice already in place on these surfaces. But these methods are costly, time-consuming and often ineffective.

Heating systems are expensive to install and fuel costs are high. Heaters don’t tend to work very well under around -10º F, meaning a system crash could occur at the most inopportune time. One simple reason heaters can’t keep up with the coldest weather is that, as snow is melted into water, it simply refreezes as ice on the switch.

Deicing fluid isn’t much better – while it’s easier to apply to places like third rails, it takes time and large quantities to melt ice.

Fortunately, there’s no longer a need to rely on outdated derailment prevention approaches. Midwest, through a licensing agreement with NASA’s Ames Research Center, is utilizing a new Zero Gravity “smart fluid” technology in our range of anti-icing railway products.

These products work to prevent ice and snow from building up in the first place, making them far more effective (and affordable) than other approaches. There are separate products for third rails, overhead catenary lines and switches. In each case, the respective product is applied in advance of (as well as throughout) bad weather. For third rails and catenary lines, the product is applied directly by the train, through a unique spraying device Midwest developed for this purpose. This eliminates a serious drain on manpower.

All of our railway anti-icing products work by disrupting water molecules, thereby lowering the freezing point. While they can be sprayed or poured in liquid form, once on the relevant surface, they solidify into a gel-like form, allowing them to resist being washed away by precipitation and even cling to vertical or steep surfaces. This provides long-lasting action.