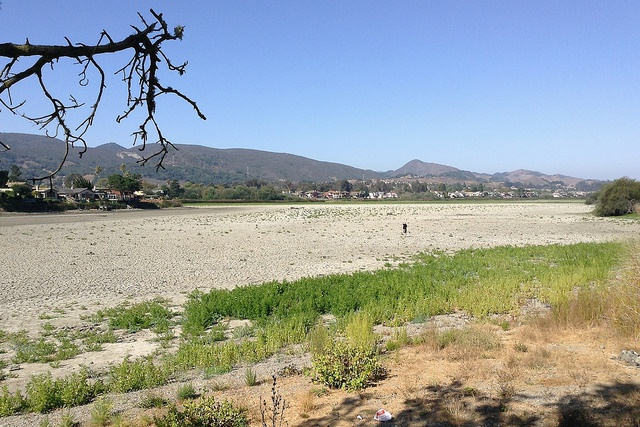 Drought is plaguing the San Joaquin Valley and has caused significant dust problems. As water is in short supply, farmers have recently received the go-ahead to use non-water methods to control dust.

California is entering the fourth year of the worst drought in over a century. More and more communities across the West have been affected, and citizens are having to cut showers short, let lawns go brown, and avoid washing their cars. But agricultural water users have borne the brunt of the drought so far.

California is the nation’s leading agricultural producer, accounting for around 70% of total U.S. fruit and tree nut farm value and 55% of vegetable farm value, according to the United States Department of Agriculture. The San Joaquin Valley irrigates the most productive and lucrative crops on the globe, which includes 1.5 billion pounds of nuts — 85% of the world’s supply.

The farmers’ fields are now under a mandatory water conservation measure, and the Huffington Post reports that San Joaquin farmers are facing at least $1B in crop losses.

The drought has affected farmers’ ability to control the dust thrown up by mechanical harvesters and trucks driving along dirt roads. This dust can be a health risk and exacerbates the region’s already high rates of asthma. Kevin Hamilton, a respiratory therapist with the Central California Asthma Collaborative, is reported in KQED as saying that this kind of dust can travel for miles, ending up in people’s lungs.

Farmers had previously used a watering truck to resolve the problem, spraying the roads to control dust and minimise air pollution. But the drought has caused authorities to reevaluate these rules. It’s often potable water being used on the roads, and that contradicts the state’s water conservation goal that wants cities and towns across California to reduce water usage by 25%.

Instead, the air district has released a special advisory that encourages farmers to limit access to dirt roads or to cover the roads with a dust suppressant, such as resins/emulsions, polymers, surfactants, adhesives, bituminous materials, or salts.

This solution is long-lasting, as it keeps fines locked into the surface to prevent dust from escaping. Plus, their EnviroKleen® product is the most environmentally safe dust control and soil stabilization solution on the market, and also has lower life-cycle costs.

Pressures on the already overburdened San Joaquin water supply can be alleviated without leaving the area vulnerable to dust storms.