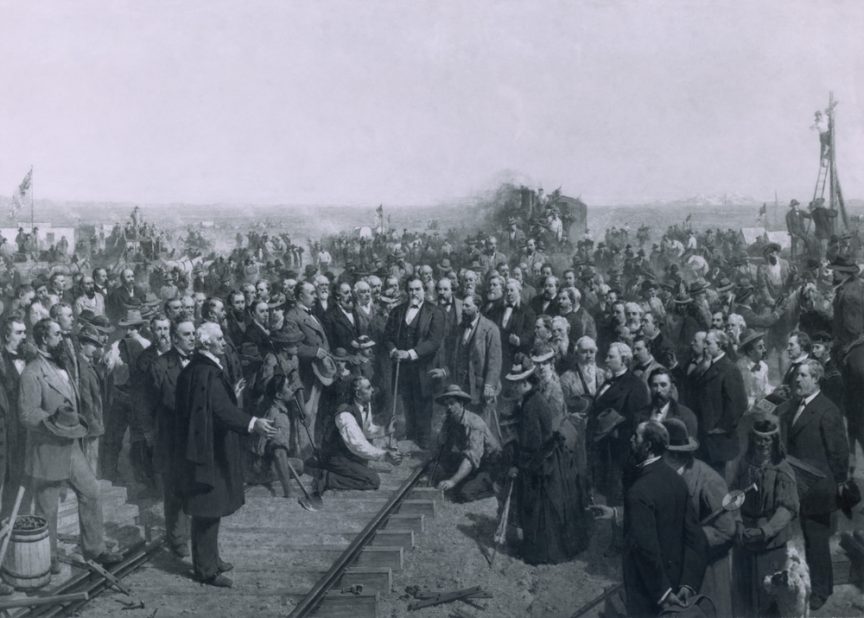 The 150th anniversary of the first Transcontinental Railroad demonstrates how far rail infrastructure has come and how important it has been to American history — and American prosperity.

On Friday, May 10th, thousands of people gathered in the Utah desert to celebrate the 150th anniversary of the completion of the Transcontinental Railroad. A century and a half ago, on May 10, 1869, the Golden Spike was driven into a rail tie, effectively joining the Central and Union Pacific railways.

Previously, Americans journeying from one end of the country to the other had to rely on wagons and horses — or turn to treacherous waterborne routes that could take even longer to traverse. Instead, that first Transcontinental Railroad meant that passengers could complete the journey in a matter of days, effectively transforming the way Americans experienced the country and did business.

The Transcontinental Railroad had a transformative impact on American history and American prosperity — both of which were honored at the sesquicentennial celebration. While this event was a moment to reflect on the importance of rail infrastructure for our national legacy, it should also serve as a reminder of the pivotal role railways play now and will continue to play in the future.

To celebrate this historic milestone, thousands of attendees gathered at Promontory Summit, Utah, where the Golden Spike marked the completion of the construction of the Transcontinental Railroad. Attending dignitaries included Pulitzer Prize-winning author Jon Meacham, Utah Governor Gary R. Herbert, President of the Church of Jesus-Christ of Latter-Day Saints Russel Nelson, and U.S. Representative Rob Bishop, to name a few.

The event is part of Utah’s Spike 150, a year-long sesquicentennial celebration aimed at educating Utahns about this iconic moment in the state and country’s histories. Other programming includes artifact exhibitions from the National Archives, organized tours of important historical sites, and events honoring the sacrifices of those who built the railroad, such as Chinese immigrants.

Maintaining Railroads — Now and in the Future

Constructing the Transcontinental Railroad was a serious challenge in the 1860s. Workers confronted severe storms, avalanches, and the perils of nitroglycerin, which was used to create important tunnels. What’s more, once the railway was completed, maintaining such a long stretch of infrastructure proved demanding and complex.

Just as it was in 1869, keeping railroads in safe working condition can be a daunting challenge. Between protecting passengers and valuable cargo and keeping railroad crew and maintenance personnel safe on the job, making sure that locomotives, tracks, and other hardware are functioning as intended calls for professional expertise and surefire solutions.

As the country celebrates the 150th anniversary of the Transcontinental Railroad, railway operators should take stock of what they can do to help their facilities and assets stand the test of time. From mechanical issues to harsh weather conditions, stakeholders face issues that require sophisticated, heavy-duty solutions. With a range of products from Midwest Industrial Supply, Inc. — including our Glidex® and Glidex MC rail switch lubricants — public and private infrastructure organizations can get just that.

Midwest’s products are designed to last through the toughest conditions. By investing in advanced rail switch lubricants, anti-icing solutions, and more, it’s possible to increase train-handling performance, reduce ongoing maintenance, and cut costs in the process. With patented products from Midwest, railway operators can ensure that their rail infrastructure will continue the legacy of the Transcontinental Railroad.