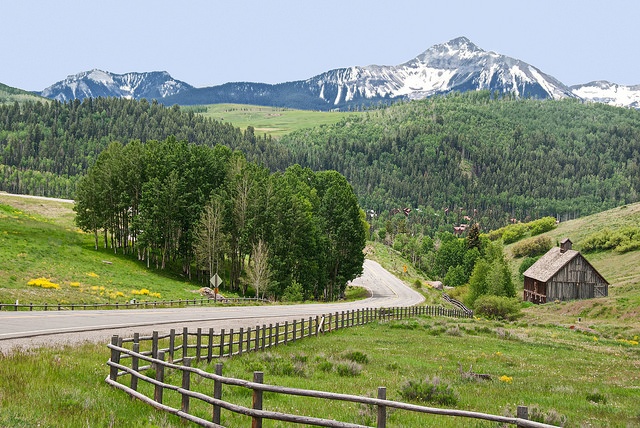 The mountain town of Telluride, Colorado, tries out new dust control measures in the hopes of preserving local vegetation and valuable snow.

Telluride is known for its world-class skiing and exciting summer festivals. But as of late, it’s also known for its dust problem. The Telluride Daily Planet recently reported that, in an attempt to mitigate this issue, the town is experimenting with a new, less harmful type of dust control for its unpaved roads.

But is the new approach cost-effective? And moreover, what are Telluride’s other options in improving the quality of their roads in an economical manner?

This may seem like a big hullabaloo for a little dust. It’s not. Dust is a severe irritant that aggravates our eyes and dirties our cars. More than just annoying, dust is actually harmful, leading to early snow-melt (which negatively impacts local ecosystems), unhealthy and unsafe living conditions, and persistent damage to cars and equipment.

Here’s how it works: when dust covers snow, the darkened surface attracts the sun’s rays instead of reflecting them, slowly warming the snow and turning it into liquid water.

According to a study in the academic journal Arctic and Alpine Research, premature snow melt leads to the early return of caribou and grizzly bears, with negative repercussions for both the animals and the environment.

In Colorado, there are elk and brown bear instead of caribou and grizzlies, but the problem is identical – and the 45 miles of unpaved roads in San Miguel County, in which Telluride resides, are a significant contributor to this growing issue.

Until recently, Telluride relied upon common dust control suppressants that are usually high in magnesium chloride. According to a study conducted by Colorado State University, high levels of magnesium chloride negatively impact roadside vegetation. But that harmful method was inexpensive – or so it would seem.

Telluride is experimenting with a new substance that has lower levels of magnesium chloride. It will help to restore the natural ecosystem, and hopefully won’t wreak additional havoc.

But the method is labor-intensive and expensive, and Telluride road superintendent Mike Homer admits that the town cannot afford to continue the project unless the results are substantial. Homer told the Telluride Daily Planet, “Unless it really works, we probably don’t have a lot of time to spend doing the miles.”

Telluride may be becoming a popular summer destination, but it still relies heavily on the revenue brought in from ski season, and why wouldn’t it?

The dust problem has larger ramifications beyond cutting a ski season short, too: early snow thaw results in increased runoff into the vulnerable Colorado River Basin, according to The University of Colorado. Clearly, something needs to be done.

Combining ecologically-friendly formulas with effective results, Midwest is a global industry leader; its Fines Preservation Program maintains roads and prevents dust particles from escaping, ultimately cutting road life-cycle costs by 50% and reducing dust by 80% for up to four years. Its line of synthetic organic dust control solutions are also the most environmentally compliant at market.

If Telluride can take advantage of this new technology, it’ll be saying goodbye to dust and hello to snow. And that means more fun year-round for residents and tourists alike.