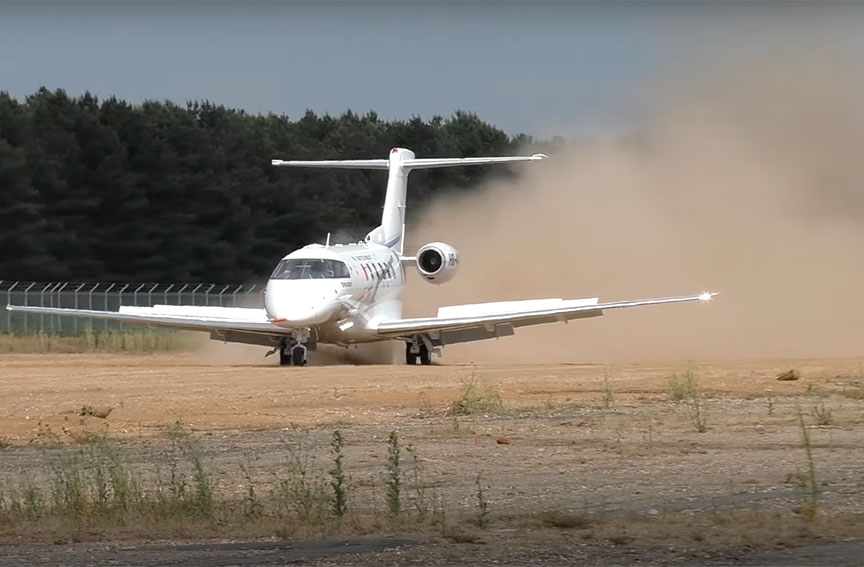 If you’re interested in aviation, you can find loads of footage watching the wondrous mechanics of all sorts of aircraft take off and land on a multitude of runways. Though many show planes departing or landing on asphalt or concrete runways, some unique footage will show airplanes landing on a gravel runway. The fact that gravel is involved makes it that much more harrowing. We thought we’d share some of our favorite clips. While these videos display nature’s magnificence in these remote locations, they also demonstrate the challenge posed with maintaining remote gravel runways. Without attentive care, these runways can easily fall prey to reduced visibility and a weakened structural integrity.

This video highlights the landing of a Dash 8-100 Chrono Aviation, a small aircraft made to carry 37 passengers as a cost-effective and gravel-runway-suited transport. In this clip, you watch the aircraft make its final descent towards the runway, coasting over a large body of water. Throughout the clip, you can see the cockpit alight with action and the pilots toggling controls as they approach their landing on the gravel runway. Once the landing gear touches the gravel runway, the plane jostles deeply with the impact. The important detail about this clip is the rough and bumpy landing. As the plane roars and you can hear it eating through the rolling friction, you get a glimpse of the difficulty of landing on gravel runways and what that poses for pilots and their aircraft.

Here we watch a PC-24 Jet from Pilatus Aircraft conduct a takeoff and landing onto a dirt runway. The PC-24 is a one-of-a-kind jet built for the purpose of operating on gravel runways. It’s best known for its quick mobility and short-field performance. The clip depicts the sleek jet gearing up for takeoff. As it taxis, you can see the gravel and dirt already start pluming around the plane, and once it starts revving down the runway, you see the clouds grow exponentially into a mini storm, which you can see trail from a landing gear shot. The plane then nimbly launches into the air. Even as the plane lifts off, you immediately notice the gigantic collection of dust left circling in its wake. The key takeaway from a clip like this is that even with aircraft built for gravel runways, the potential for sight-disrupting dust is still a prevalent battle.

The B737-200 COMBI shown in this video gives an important consideration for aircraft operators, owners, and airport managers. The B737-COMBI was made as a versatile aircraft for both passenger and cargo loads. The video shows the aircraft from a wing view as the plane lands onto the gravel runway. As the plane descends, the landing gear wing shields and thrust reversers are deployed for an efficient stop. What’s important about this clip in tandem with the PC-24 is, again, the prevalence of dust. While the PC-24 showed the immense volume of dust, the B737-COMBI displays the mechanics of a gravel-suited aircraft. These opening on the wings, as seen in the video, can fall prey to damage because of this dust making its way into the plane’s internal operations. Without the proper maintenance for your gravel runway, your plane could experience damages that deal safety and financial blows to your work.

In this final clip, we see footage of a Summit Air Avro RJ85 Passenger Jet making a snow-filled landing on a gravel runway in middle of winter. This aircraft is made to be versatile for the most rugged of terrains with 90 passenger seats. Moving in front of a white snow-encased landscape, the plane makes its way down the gravel runway. As it barrels towards a stop, full gusts of snow and gravel dust tail the aircraft. While this video is a breathtaking display of modern aviation engineering, it also shows added obstacles of not just gravel runways but utilizing them in the heavy winter months. Maintaining a gravel runway in the snow gives the added challenge of overcoming ice mixed with fines particles.

Midwest understands that the solution starts with treating the gravel runway

Often, when airports try to accommodate landing on a gravel runway, they focus on the plane, equipping them with gravel kits so they can withstand the impact and prevent damages. But these kits can only partially mitigate the problem, and even in seeing planes built for gravel runways, you’ll notice that it may protect the physical aircraft, but it does not prevent the dust and debris from creating a dangerous plume. With the dust still pluming, it has the potential to sneak into its internal system as well as reduce the pilot’s visibility. In this sense, the best way for making these situations safe must start with treating the runway itself.

Midwest Industrial’s SECUR® gravel runway stabilization system is the science-based solution that will deliver you the performance you need. Our gravel runway solution involves the unique installation process and our patent protected synthetic fluid, EK35. The chemical places a firm hold on the surface of gravel runways after constructing into the upper 4-6” inches. Once it reacts with the aggregate, the substance transforms into a solid that binds fines particles and gravel into place.

Not only has the SECUR® stabilization system been successful in stabilizing gravel runways and suppressing dust, it’s also a proven cost-effective and efficient program that lasts through all seasons. It’s the only product on the market that can withstand the freeze/thaw cycle. Whether you’re operating on a gravel dirt runway in the summer like the Dash 8-100 or making a high-impact landing in the winter like the Air Avro RJ85, the SECUR® Stabilization System will keep your runway safe and operational without the need for multiple reapplication sessions for years to come.

If the SECUR® Stabilization System sounds like the solution for you, contact us today to receive a quote from one of our professionals.