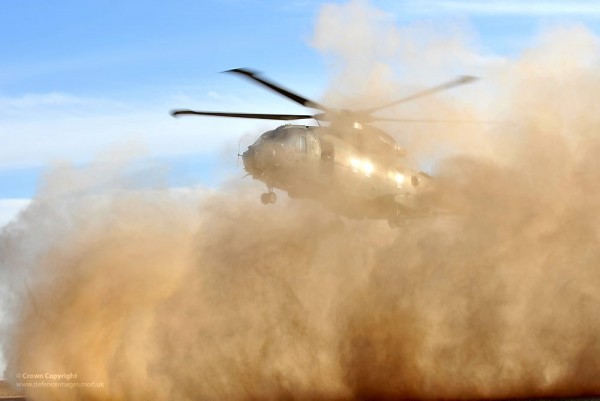 The servicemen and women of the United States Armed Forces confront peril and defend our shores every day. In order to protect our citizens at home and abroad, they overcome challenges most civilians can scarcely imagine. Fortunately, there are some difficulties that grateful people and companies, like Midwest Industrial Supply, Inc., are equipped to help them tackle.

One of the most pervasive logistical problems that military aviators struggle with are “brownouts,” or in-flight drops in visibility due to sand, dust, or dirt in the air. The debris particles kicked up into a cloud when, for example, a helicopter approaches the ground can make it impossible for the pilot to see outside.

This situation can be dangerously disorienting for pilots, who rely heavily on eyesight and visual references near the landing zone to control the aircraft near to the ground. Dust thrown up by landings can also erode rotor blades and damage engines, filters, and electronic equipment.

When flying blind in a brownout, spatial disorientation and a loss of situational awareness can cause accidents. Imagine parking a car while blinded by a dust storm surrounding your vehicle. And the situation can quickly turn deadly: in fact, brownouts have claimed more helicopters in recent military operations than all other threats combined.

How Can Brownouts Be Avoided?

Several factors can contribute to the probability and severity of a brownout, including wind, approach speed, and the angle of entry. To combat some of these, pilots are highly trained to use synthetic vision systems and rely heavily on non-visual cues to calculate their position relative to nearby objects and the ground.

Recently, the Air Force Research Lab at Wright-Patterson Air Force Base partnered with Applied Mines, Inc. to design a high-resolution camera on the nose of a helicopter to take a photo of the landing zone while still in-flight, before the aircraft gets close enough to the ground for the motion of the rotators to create a brownout effect. The photograph is uploaded to an onboard computer which can track and guide the helicopter’s descent based on the image taken.

Although a potentially very helpful tool, the price of this prototype camera-computer system is quite hefty — the current projected cost is about $150,000 per chopper. It is also an imperfect solution. Should any feature of the landscape change in the moments between when the camera takes a picture and when the brownout is in full effect, there will be no way for the pilot to know what’s happening.

Fortunately, one of the most common causes of brownouts — unfavorable and untreated soil composition — is also the most preventable, as excellent site preparation can greatly reduce the risk of catastrophe. Midwest’s dust control agents stabilize landing areas easily and affordably to prevent the hazards of a brownout.

Soil-Sement® has already proven effective on helipads used by Blackhawk military helicopters. These tested locations include both temperate and desert climates, as well as conditions that included wind blasts in excess of 100 miles per hour and temperatures as high as 120˚F. Soil-Sement effectively controlled dust issues for as long as a year in some instances before retreatment was necessary.

Midwest also offers both EK35® and EnviroKleen®, U.S. EPA-classified synthetics with longer-lasting performance, regardless of the season. Their synthetic fluids and resin binders lock surface aggregate and fines together, preventing them from escaping into the air as fugitive dust.

Regardless of weather or intensity of use, EK35 and EnviroKleen remain active on clay, sand, gravel, limestone, and almost all native soils. They can be reworked without re-application, do not evaporate or leach out of the surface, perform well at extreme temperatures, and are readily biodegradable in natural environments.

The servicemen and women of the armed forces work hard every day. Midwest is proud to offer solutions that protect the folks who keep us safe.