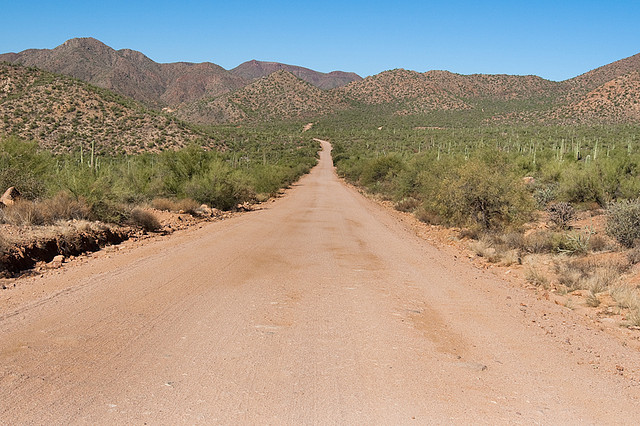 Tucson’s residents are in conflict over whether or not to pave their dirt road. However, there is a solution that can please everyone.

To Pave or Not to Pave?

Tensions are rising in a quiet community in Arizona, according to KVOA Tucson, over a simple question: should they pave a dirt road? The thoroughfare running through the Camino Miraval neighborhood is unpaved and many want to keep it that way.

Christopher LaPolice, a local resident, says the road “sits very harmoniously with the natural landscape around it. The idea of having a black asphalt ramp through the neighborhood is just not as appealing.” Others believe that paving the road is a necessary solution to solve the area’s problems with potholes and dust.

Road problems aren’t unique to Camino Miraval. According to Domenica Fuller of KVOA, over 60% of roads in Pima County are considered to be “failing.” One resident claimed, “Our property values have gone down $20,000. We haven’t had any maintenance on this road, other than begging to patch a few potholes…It’s really bad.”

Despite the pleas for assistance, Pima County’s Department of Transportation has not offered to pave the streets. Priscilla Cornelio, the DOT Director, has stated that residents and developers are allowed to pave the roads themselves, as long as they’re willing to foot the bill.

However, they also need at least 60% of residents living along the road to agree. Otherwise, they would have to present their case to the board of supervisors. While the city will not pave the road, they do maintain and grate the road on a regular basis.

One nearby community took the government up on their offer and banded together to pave their street. They paid out of their own pockets, but achieved less than satisfactory results. The road they paved is described as “a patchwork of asphalt and dirt.”

Penny Kautz, who lives on a dirt road in the area, believes if people want a paved road, they should have thought of it before purchasing their home.

“People will move into a neighborhood that has clearly been dirt since the history of Tucson and move into the house, live there for a few months and say ‘we hate the dirt road, let’s pave it,’” said Kautz. “So if you don’t want to live on a dirt road, don’t buy a home here.”

Unpaved roads cause more problems than just headaches for drivers. Dirt roads have been identified by the Environmental Protection Agency (EPA) as a serious source of pollution.

Rain, wind, and traffic cause loose dirt and dust, among other pollutants, to either erode from the road surface and make their way into nearby streams and other bodies of water or fly up into the air, decreasing visibility and causing respiratory issues.

In the late 1990’s, the city of Phoenix, Arizona faced critical dust problems as the result of unpaved roads and lots. The EPA created a federal implementation plan for the city in response to a court order. Owners were required to pave frequently traveled roads, revegetate unused dirt lots, or control dust by using stabilization technology.

A Solution for Everyone

Pima County residents might want to take inspiration from the EPA and look for resolutions beyond paving. Midwest’s dust control products and services offer a water-free solution that prevents potholes and reduces grader usage by 90%. The use of dust suppressants is more economical than paving surfaces, friendlier to the environment, and minimizes negative effects to human health.

In addition, Midwest could provide a road building solution that could come at a fraction of the cost of paving with asphalt. Rather than emptying residents’ wallets or settling for unstable roads, Pima could turn to GreenPave, Midwest’s environmentally friendly natural paving solution.

GreenPave mixes native soils with scientifically advanced binders to create surfaces with incredible strength that only increases as the road is used over time.

Applying dust suppressants to Pima County’s roads would please both sides in this debate, maintaining the area’s quaint appearance while also improving quality of the road for drivers. To end the rancor and satisfy both sides of the debate, Pima County should look to Midwest for the answer.