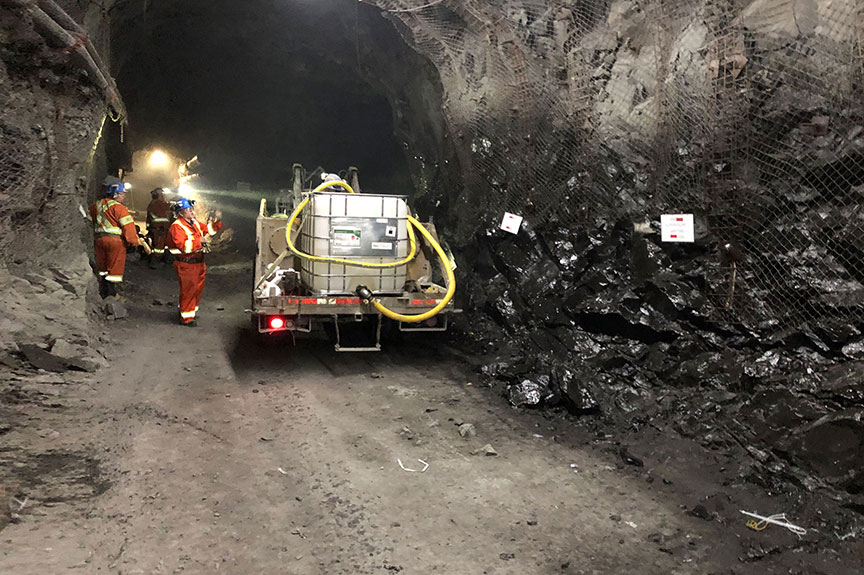 A major North American non-ferrous underground metal mining company was using a commercial dust suppression product to suppress dust in their underground mine. Per mine management, this product was not meeting their needs, usage was much higher than they wanted and the costs (approximately $650,000 annually) were not meeting their expectations.

The chemical product that was then being used had to be applied once every three days. Water carts were interfering with daily operations, hindering efforts to move product out of the mine. Labor costs were also up: 487 manhours per year were dedicated to tasks associated with controlling dust.

In the section of the mine with the heaviest traffic, water usage was actually destroying the road increasing the need for regular reworking of the road and maintenance work.

After considering several options, they approached Midwest to conduct a site audit.

Midwest identified several critical metrics to address and track. First, of course, was the cost issue. Midwest determined that the MineKleen program would help the mine reduce costs by over 30%.

Second, Midwest proposed to cut the manhours required to control dust from 487 to less than 250. This estimate was based on the third metric, which was the number of days between applications. Based on preliminary testing, it was determined that the days between applications could be doubled, from three to seven. However, Midwest set a stretch goal to achieve 11 days.

By doubling or even tripling the days between applications, Midwest hoped to reduce the number of annual applications from 122 to less than 61.

Through these efforts, Midwest anticipated that switching from the commercial product to their MineKleen Plus formula would result in a 42% reduction in total number of gallons of product used.

After the first few months of testing Midwest’s product, the client came to believe that they would see an estimated 22% cost savings.

By the end of 12 months, however, the results blew past their expectations. Midwest’s proprietary MineKleen Plus formulation has an accumulative effect, meaning the longer you use it, the more it works. This is because of its unique binder system that binds dust particles together at the molecular level.

This binding action builds up compressive strength in the soil over time. This actually repairs road strength over time, creating a more durable surface that requires reduced maintenance and grading.

This was the first major benefit realized: the running surface of the mine road system was significantly improved.

In addition, reduced road maintenance and almost no watering meant there was less interference with production activities and workers were able to more efficiently get product out of the mine.

Because of the durability of Midwest’s MineKleen Plus formulation and a standard preventative maintenance cycle, the average days between applications increased beyond the objective established with the client, now every 14 days.

Such a dramatic increase meant that the number of annual applications dropped from 122 to a mere 28 (about two per month).

Manhours went from 487 per year to only 133. And the annual gallon usage was cut by 43% by switching to MineKleen Plus formulation.

Altogether, this led to a cost reduction of almost 35%. This saved the mine about $225,000 per year. Their new underground mine dust suppression program now only costs them about $425,000 per year.

At Midwest, we have long incorporated rigorous testing into our client programs to prove the results of our products and to help each client reach their goal of achieving the greatest possible cost-benefit ratio without sacrificing performance.

But for 2020, we have upgraded our underground mine dust suppression program to maximize its efficiency and ease-of-use. Here’s what you get with our program:

To learn how we can get these same kind of results for your mine, visit MineKleen.com.