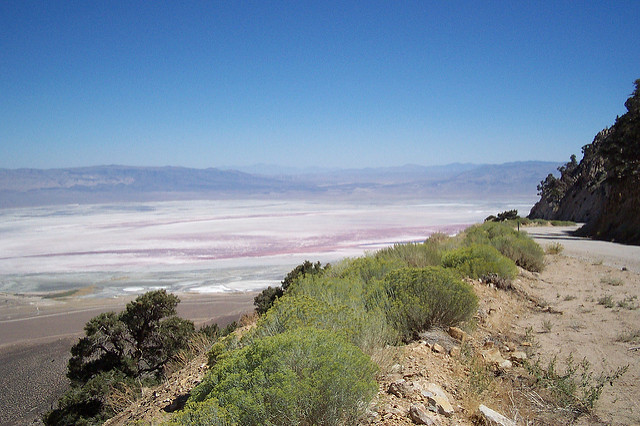 Dried up Owens Lake may soon be getting a solar panel makeover that could mitigate its notorious dust problem while providing sustainable energy to Los Angeles.

Owens Valley is the dustiest place in North America and the second dustiest worldwide, but this was not always the case. In fact, just over 100 years ago the valley was home to a vibrant lake covering 110 square miles, reaching depths of up to 45 feet. In 1913, however, the river that fed the lake was diverted to Los Angeles to meet the demands of the growing city; just 13 years later, Owens Lake was completely dry.

Currently, this valley is the largest single source of PM10 dust in the United States, producing up to 8 million metric tons per year (according to Sequitur) and affecting 40,000 people, as the EPA explains. The effects of this dust are grave: the carcinogenic particles have been shown to imbed themselves in an affected person’s lungs for life, according to the Places journal, and the Great Basin Unified Air Pollution Control District has struggled for years to control the dust to no avail.

The hopes of the District and local residents are pinned on a new plan to install solar panels over 616 acres of the dried bed, which will present the dual benefits of controlling dust and generating sustainable energy.

Proposed efforts to limit the dust blown from Owens Valley have included gravel cover, layering the lakebed with old tires, and even coating it with sewage. For various health and financial reasons, none of these ideas have come to fruition, with shallow flooding and managed vegetation implemented in their stead.

However, this system has depleted the precious water supply of an already drought-stricken state. Meanwhile, its efficiency is questionable: salt clogs the piping and sprinklers used in the irrigation system, and ultimately causes more dust as a crust forms on the lakebed surface. As a result, the Los Angeles Department of Water and Power (LADWP) has turned its focus to a promising alternative: solar panels. The $500 million project will begin with a 500-kilowatt demonstration project on five acres to test the impact of dust on the panels, and vice versa, according to the Sheet.

If the project moves forward, it could provide a long-term solution for controlling the dusty expanse, while simultaneously supplying the residents of Owens Valley with sustainable energy. Moreover, the solar panels would reduce the need for shallow flooding, saving enough water to supply 60,000 households every year, and the construction labor required by the project would provide a much-needed boost to the California economy.

Before the project can be formally approved, a trial demonstration must prove the system to be financially and functionally viable. The proposal also faces pushback from environmentalists; the controlled flooding has spurred the return of thousands of birds migrating along the Pacific flyway, leading to the designation of Owens Lake as one of the 17 most important avian sanctuaries in the state by Audubon California. In response, the LADWP has promised to continue flooding at least a portion of the lakebed.

Whatever direction the LADWP chooses to take, Midwest Industrial Supply, Inc.’s environmentally safe solutions could go a long way in the fight against Owens Lake dust. The roads used for the current irrigation and construction projects see a lot of truck-heavy traffic, and access roads to the solar farm would also see regular use. Midwest’s proven dust control solutions, such as Soil Sement®, are certified by the EPA with a proven track record of reducing PM10 and PM2.5 emissions by up to 95%. With Midwest, Owens Valley can be guaranteed a dust-free future.