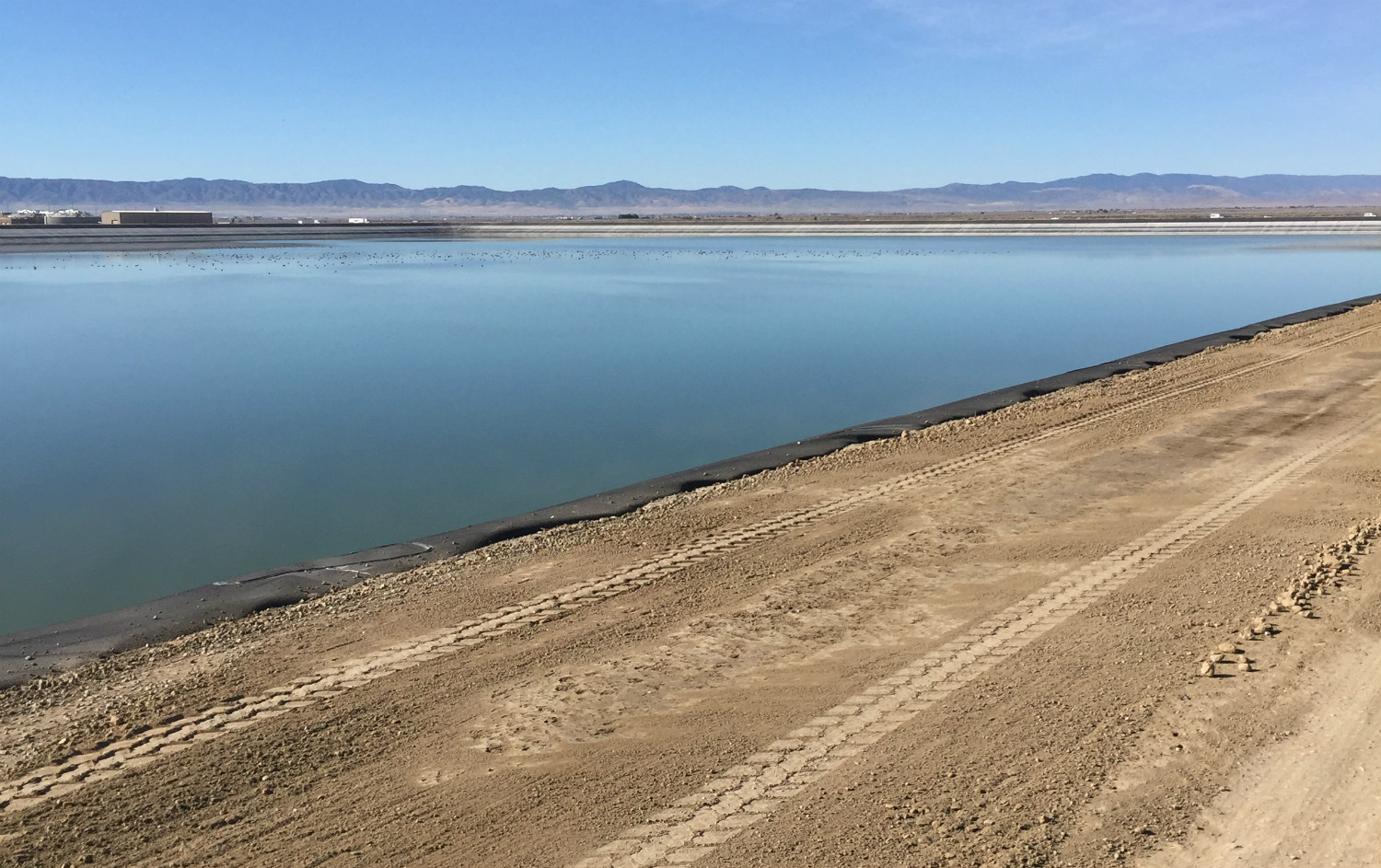 A wastewater reclamation facility was hampered by erosion, slick roads, and “blowouts.” The innovative application of Midwest’s Soil-Sement® put a stop to these stabilization problems.

The LA County Sanitation District handles roughly half a billion gallons of water each day, and the work of processing and storing all that water was beginning to take its toll. The soil slopes bordering wastewater reclamation ponds at a Lancaster, CA facility were showing distressing signs of erosion, affecting not only the integrity of the pond, but also of the unpaved roads that top these slopes.

The facility had begun to experience “blowouts” on their roads; rain events would produce potholes that would bore down and out then blow laterally out of the side of the hill, ejecting soil material away from the roadway. These areas (30 in total) not only made for difficult driving conditions, but with a harsh El Niño season forecasted ahead, posed the risk of a pond wall failure. That’s when LA Sanitation contracted Midwest Industrial Supply, Inc. for a solution to its major erosion problem.

The pond sites are fenced in by clay-rich soils that, despite forming an effective water barrier, are vulnerable to rill erosion, as the soil can actually end up floating on the water. At the same time, blowouts accelerate the rate of erosion while diminishing the overall strength of a given road. In fact, roads become so slick and soft during periods of heavy precipitation that maintenance trucks are unable to move along them at all.

Midwest had to develop a solution that addressed the specific needs of LA County Sanitation, reducing erosion and improving their roads’ drivability in a cost-effective manner. Plus, with the indication that the El Niño storm season could bring with it some brutal weather, the solution would have to seal all road surfaces and protect them from harmful moisture penetration. Ideally, Midwest could adapt a single product to solve each individual problem.

Ultimately, Midwest determined that their Soil-Sement® Engineered Formula would be a perfect fit for each scenario. Soil-Sement is an environmentally friendly polymer emulsion that binds native soils into a stabilized, robust surface, while locking out water and improving retention.

To patch existing blowout holes, Midwest mixed Soil-Sement with in-place soils and backfilled the materials into blowout tunnels until the surface was level and at a desirable density. After fixing these trouble spots, Midwest addressed the issues plaguing the road surface by blending Soil-Sement into the road surfaces and topically applying a sealing coat. This not only reduced the slickness of the road, but increased its load-bearing capacity (CBR).

Finally, Midwest adopted a three-pronged approach to reducing rill erosion on the slope surfaces and roadways; via a series of experiments, they would find the most effective solution for the circumstances. The strategies included:

Nearly overnight, the project produced obvious and dramatic improvements to the stability and strength of LA County Sanitation’s road surfaces, as the soils were more durable, compact, and drivable. The roads’ performance throughout the El Niño storm season was the most telling indicator, however; only six small areas needed retouching (compared to 30 from the year before), with no indication of blowouts whatsoever.

Since that time, the LA County sanitation site has experienced noticeably improved conditions, and Midwest continues to monitor the site and recommend strategies for reducing erosion and retaining soils.

Midwest is proud of their ability to tailor solutions to the unique challenges of its clients, and in this case, we were pleased that Soil-Sement could solve several unique problems without the need for additional resources. Plus, because the product has no impact on water quality, LA County Sanitation can rest easy knowing that its approach to surface stabilization is more than compatible with the strictest standards for environmental friendliness.