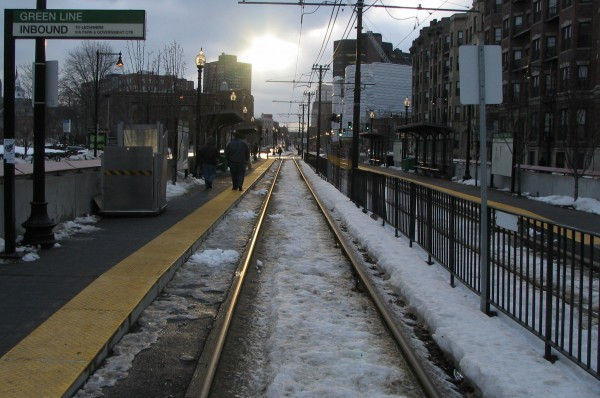 When a Northeast city’s transit network needed help delivering consistent service to thousands of commuters, Midwest and its Zero Gravity Third Rail® technology were there to help.

With New England’s residents growing increasingly frustrated with consistent delays and cancellations due to the area’s third snowiest winter on record, the public transit system needed to find a way to help commuters get moving again — and quickly. Less than 24 hours after first contacting Midwest Industrial Supply, Inc., they had a specially tailored solution to their weather woes delivered straight to their door.

Train stalling, caused by ice buildup along subway rails, was already giving commuters a serious headache this winter. With yet another major storm blowing in last weekend — cancelling more than 400 incoming flights at one airport and suspending an entire line of AMTRAK service — transit operators needed a de-icing solution that was ahead of the curve, and they found it in Midwest’s Zero Gravity Third Rail agent.

Co-developed with NASA, the technology behind Zero Gravity Third Rail sticks to rails and doesn’t let go, continuing to fight ice buildup without the need for constant re-application. “If you don’t have that technology, the product will drip off the rail and most of it will stop working before it’s actually needed,” explained Midwest Rail & Transit specialist Eric Vantiegham. Alternatives to Zero Gravity are “not as effective and you need to apply more of it for the product to stay in place.”

Vantiegham says that the city’s transit officials came to Midwest after hearing about the work they did to protect major U.S. public transportation networks against harsh weather conditions. Midwest was able to deliver not just twelve drums of Zero Gravity Third Rail, but also a custom applicator specially retrofitted for the subway system’s own equipment.

Midwest normally would have advised using their Ice-Slicer® Third Rail Spray Systems, which are built and customized for each individual customer before application onto a maintenance or non-revenue car. But facing such a tight deadline, Midwest opted for their Cobra® Winter Spray Systems. Within fourteen hours, the transit authorities had received their order, and “were able to get them on the trains within 24 hours and make them fully operational.”

It’s important to note that this was only a short-term solution for the metro area. Though the transit system currently only has two of Midwest’s patented sprayer systems in place, they’re in talks with the company to develop a full-scale plan for next winter. We predict that, come 2016, the people of New England will be traveling a lot more quickly, reliably, and safely, no matter how bad the weather gets!

Midwest is excited to partner with yet another public transit network to keep one of America’s most important regions moving day and night. When conditions are at their worst, the biggest names in rail and transit call Midwest to ensure their services keep running smoothly. Give us a call or find us online today — if you’re looking for safety, efficiency, or just peace of mind, once you’ve enlisted Midwest, you can consider it done. Read the full story here.