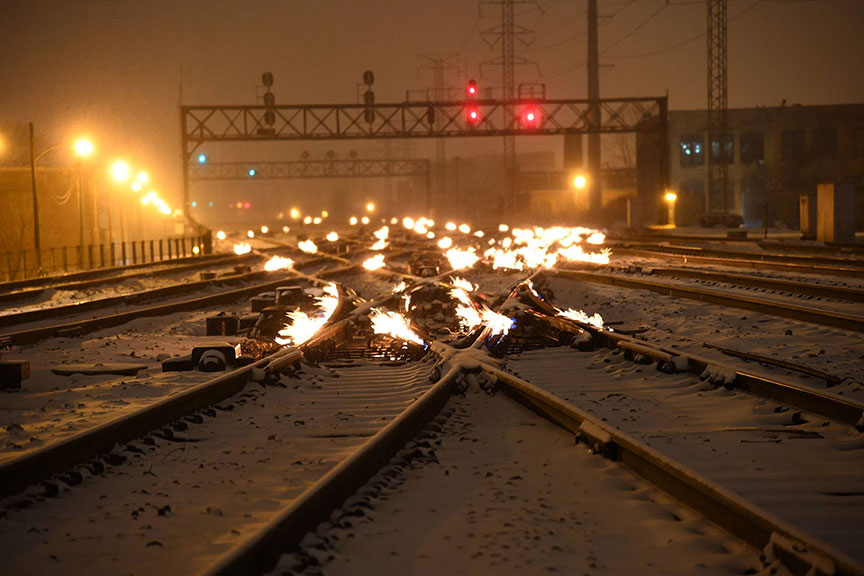 Your current approach to third rail deicing doesn’t work as well as NASA’s. Here’s why.

In 2019, Chicago’s Metra commuter rail system gained notoriety for appearing to set their railway tracks on fire. Of course, the tracks weren’t literally set on fire. But the video footage caused quite a stir. That January, temperatures hit a shocking 50 below, with windchill. To keep trains running, maintenance crews lit gas-fed heaters that run alongside the rails to keep them warm. These heaters required manual lighting, and maintenance crews had to work 12-hour shifts to keep an eye on the flames.

As labor-intensive as that sounds, it’s quite an improvement over how the job used to be done: decades ago, crew members poured kerosene over the rails and lit it with a match.

If you’re wondering if it’s really necessary to use live flame on railways in the 21st century, you’re not wrong. On that note, today’s article covers the most common, and inefficient, deicing methods used today. We’ll also cover a 20-year-old NASA innovation that makes all other approaches to third rail deicing outdated.

There are three conventional methods to deicing third rails and switches. Because of the many problems with these methods described below, Midwest collaborated with NASA on another option: one that takes a radically different approach to dealing with the challenge of ice. But more on that later.

The three methods are heaters, manual snow and ice removal and the use of deicing liquid.

Like the Chicago story above, it’s no surprise that using heaters is the most common approach to deicing third rails and switches. But heaters have their fair share of problems.

Heating options include heaters that blow forced air or live flames onto the tracks as well as hot plates that lie along the rail. These are heated via electric current, natural gas or propane. (You can see from this YouTube video how a propane-fed hot plate works.)

The first, and most obvious, challenge these present are the ongoing fuel costs to keep them going all winter. Even with modern, thermostatically-driven heaters that only turn on when the rail temperature drops to a certain point, these fuel costs have a dramatic impact on operating expenses.

A second problem is safety-related. No matter the type of heater or fuel source, these options are all exposed, presenting plentiful opportunities for people or animals to be burned (you can see how easily an accident could occur in the video above; though one would hope common sense would keep people away from the track altogether, a simple trip or fall near the tracks would be all it takes to create severe injuries).

Finally, many heaters struggle to operate at sub-zero temperatures. Should heaters fail during harsh winter conditions, rails are in the same position as if there were no heater in the first place. Trains will be delayed and maintenance crews required to manually remove the buildup of snow and ice.

Manual removal of snow and ice.

Manually removing snow and ice by sweeping, snow blowing and other efforts are just as labor intensive as in the Chicago story above, where crews had to work 12-hour shifts to monitor flames.

Freeing a set of frozen switches can take an entire team hours. And where third rails are used to supply electricity to trains, manually deicing the third rail simply isn’t feasible.

Deicing liquids, typically exothermic in makeup, include chlorides, potassium acetates or alcohol-based materials. They provide the flexibility for deicing third rails that most heating systems or manual removal just don’t have. But they have their own issues.

Alcohols are very volatile, and therefore are simply not a reliable option.

Chlorides are corrosive to metals and are detrimental for the environment (we’ve written about their environmental toxicity before if you’d like to see the evidence for that). They are also not effective below certain temperatures, with some chlorides only working down to +20º F.

Finally, both chlorides and potassium acetates are conductive, meaning they can interfere with the electrical conductivity between the third rail and the train.

It’s important to understand that it takes a significant amount of third rail deicing product to actually break down ice. For example, a single switch requires between five to ten gallons of product. This makes application expensive, as well as challenging when there are large numbers of switches (such as at rail yards) or long stretches of third rails.

Perhaps the worst issue is that the low-viscosity nature of most deicing products means they don’t stick well to surfaces. The liquid gets poured onto third rails and switches, then simply runs off. This means there’s no residual, long-term effects, so the deicing agent has to be reapplied constantly to keep snow and ice levels low enough for safe operation.

The NASA innovation that rethinks ice

In 1997, NASA stepped in to solve the quandary of toxic, ineffective deicing solutions. Their specific application interest was in protecting aircraft from ice, but a partnership with Midwest led to a modified version of the resulting product that could be applied to railway third rails and switches.

In essence, NASA realized that the real answer was not actually deicing at all. Instead, they took a preventative approach, and designed a third rail anti-icing liquid.

This new liquid included propylene glycol (which is vastly safer than ethylene glycol; so much so that it is considered “food grade” by the FDA and is a common food additive in many packed foods) and a thickener.

The benefit of the thickener is that it increased the viscosity of the product, allowing it to stick to surfaces much better than other deicing liquids. It sticks so well, in fact, that it can stay in place on vertical or steep surfaces. Although it sprays on as a liquid, it solidifies into a gel-like texture, which means it is not dislodged by snow or other precipitation.

While the product works quickly and efficiently as a deicing agent for third rails and switches (melting ice in as little as five minutes, a time unmatched by other deicing products), it comes into its own when used preventatively as an anti-icing agent.

When applied to a dry surface, it lowers the temperature at which snow and ice can attach to the surface. It does this by placing gaps between water molecules, thereby disrupting the freezing process. Snow and ice either melt or simply form a soft mush that is easily brushed away.

Because of the proactive action, switch and third rail anti-icing actually requires only a fraction of product compared to deicing. Whereas deicing a switch can require five to ten gallons of product, anti-icing only requires a single gallon. This alone is a huge cost-saving benefit.

Through our partnership with NASA, Midwest developed one product specifically for switches and one for third rails. Third rails presented a unique application challenge, however, because of the need to cover a continuous line. So, like with all of our products, we built an entire system to facilitate automated, hands-off application.

A sprayer system attaches under the train and, guided by sensors, applies our anti-icing product directly to the third rail. This can be done before an oncoming storm for the preventative benefit; then, every fifth or even tenth train can be equipped to readminister the product, creating a residual effect that keeps the rail clear through the worst weather.

(A further benefit is that, unlike heaters that start struggling to keep up in sub-zero weather, our anti-icing products remain effective in temperatures as low as -70º F.)