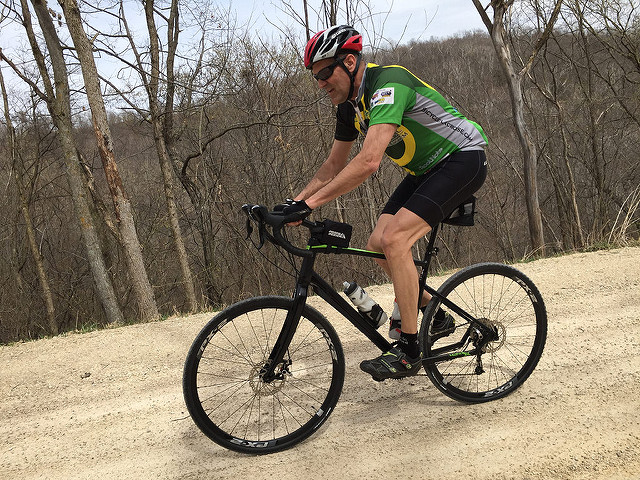 Long distance bicycle racing on gravel roads is steadily growing in popularity in states like Missouri, where an abundance of stone and unpaved roads create the ideal setting for the sport.

Miles of gravel road in Missouri are drawing cyclists out of their warm homes to race on the untraditional surface during the winter months. The past five years have seen a steady and significant rise in gravel cycling’s popularity, as more and more riders are tempted by its safe yet variable conditions. Grassroots races are popping up all over the state, changing the landscape of the cycling world — and bringing more attention to the gravel roads themselves.

Gravel roads are attractive to cyclists particularly during the winter, according to Columbia Missourian, as the surface is less affected by the weather than either asphalt or dirt trails. Dirt trails are especially vulnerable in the winter, as the freeze-thaw cycle wreaks havoc on the soil. During the day the sun warms the top layer of dirt, creating perfect conditions for severe damage. As a result, “gravel grinding” is becoming the preferred alternative for those who would rather not stay indoors on a stationary bike.

But the setting of gravel roads is also enticing to the riders for purposes beyond just conservation. Not only is there little car traffic on the roads, but the escape from the more developed areas surrounding typical paved roads is a welcome respite for many. Riding without being surrounded by speeding cars is safer for the riders and motorists alike.

Yet, gravel doesn’t come without its own risks. Gravel surfaces can be less forgiving than asphalt or dirt in the event of a crash. Additionally, the conditions of these roads are always changing, thanks to weather, consistency, and maintenance (or lack thereof), and therefore require an awareness of speed and wide tires.

Not surprisingly, the sport is beginning to see a competitive circuit take hold. The Rocheport Roubaix, in only its second year, already has more early registrations than its first, and the organizers are expecting more than 100 people to attend, as Ultramax Sports reports. The biggest race, the Dirty Kanza, started in 2006 with only 34 riders, and has since grown to 1,900.

All available spots were filled in just three hours after being opened for registration. Races like the Rocheport Roubaix and the Joe Dirt ride are all organized by the cyclists themselves via Facebook and other social media, creating a strong sense of community that attracts newcomers.

The more than 140 million miles of unpaved gravel or dirt roads in the United States play a key role in its infrastructure. Beyond providing a playground for cyclists, gravel roads are often the most affordable means of connecting citizens and transporting resources. In many rural communities, traffic is so low on the unpaved tracks that it makes no economic sense to pave them (it also makes them ideal for gravel grinding).

Unpaved roads are the predominant component of the transportation networks and are used to move agricultural products, timber, and to access remote areas for recreation. Costs are minimal thanks to a general simplicity required in maintenance — grading and good gravel. The quality, size, and volume of the stones greatly contribute to the road’s upkeep (while also contributing to a gravel grinder’s riding experience). These are important factors for local road departments and cyclists alike to remember.

Properly caring for gravel roads extends their life, while lowering the monetary and environmental costs involved. Midwest Industrial Supply, Inc. has gravel road solutions that can keep dust out of the eyes and lungs of the cyclists, while protecting the health of the surrounding environment and community. As gravel grinding continues to gain popularity, Midwest can help to keep the road surface and scenery pristine for all to enjoy.