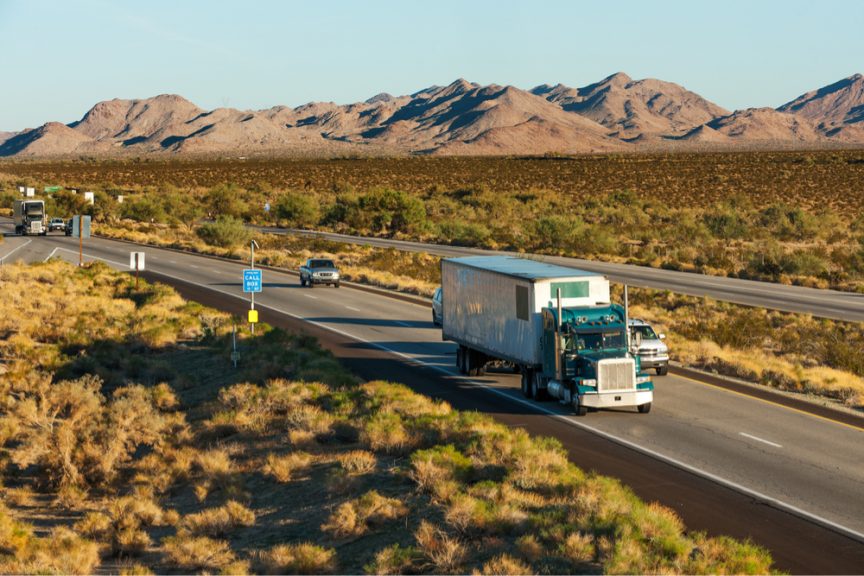 A historic drought has contributed to destructive dust storms on a major highway in Arizona. Midwest’s soil stabilization techniques have helped the state eliminate dust emissions all along it.

In 2017 alone, Arizona’s Interstate 10 witnessed 85 separate accidents caused by dust. Thanks to a significant drought that’s engulfed two-thirds of the state, conditions on the primary route between Phoenix and Tucson have become treacherous, forcing drivers to soldier through thick plumes of dust carried through the air by wind.

With seemingly little relief from the drought on the horizon, Arizona’s state government is racing to manage dust emissions on this critical highway, introducing innovative tracking and forecasting technologies to alert drivers to coming dust storms. It’s also seeing results from its investment in a quality soil stabilization product, Midwest’s own Soil-Sement®.

Interstate 10 is among the longest transcontinental highways in the United States, spanning more than 2,400 miles between Los Angeles and Jacksonville. It runs for more than 390 miles in Arizona alone, connecting the state’s two largest cities, Phoenix and Tucson. Unfortunately, high winds and heavy dust have made this section of road particularly challenging to navigate in recent years.

A ten-mile stretch of Interstate 10 near the city of Eloy in Pinal County has grown even more hazardous as of late, as most of the 85 dust-related car accidents that occurred on I-10 last year were on this short strip of road.

Dust, of course, is always a challenge for Arizona, but recent conditions have made the problem even worse. According to the Department of Agriculture, the state currently suffers from “severe to extreme drought conditions,” while the official U.S. Drought Portal claims that an abnormal drought affects 100% of Arizona’s population. The state’s farms and roadways have proven particularly susceptible to drought-induced dust problems.

With the number of accidents on Interstate 10 still rising, the Arizona Departments of Transportation (ADOT) and Environmental Quality (ADEQ) decided to experiment with some innovative approaches to dust control, including radar equipment, electronic message boards, and other technologies designed to warn drivers of coming dust storms before they materialize. They also turned to Soil-Sement, a product the state hadn’t previously worked with.

Soil-Sement has quickly transformed the 60 acres of land on which it was applied — local news outlet ABC15 reports that the surface quickly stopped producing dust altogether. A synthetic organic soil stabilization product, Soil-Sement settled into the unpaved tracts of land surrounding Interstate 10 and fused with the aggregate to engineer dust-free surfaces that are resisting the extreme heat and heavy winds of the Arizona desert.

ADEQ had tested several other products before using Soil-Sement. The first dust suppressant they used was a “glue-like material” designed to seal the surface and prevent dust from entering into the atmosphere. According to local radio station KJZZ, this material washed away with rain, rendering it ineffective. Since applying Soil-Sement, the state has found that “no sediment [has] collected and the surface remains stable, without any visible dust emissions.”

While your dust-related concerns may not be as severe as Arizona’s, their use of our soil stabilization technology is just as effective in similar situations. At Midwest Industrial Supply, Inc., we’ve worked for more than four decades to help private companies and public authorities suppress dust everywhere from unpaved community roads to vast mining sites.

Backed by patented products like Soil-Sement, we work closely with you to develop an application plan or managed service program that’s tailored to your needs, which in turn helps you minimize ongoing maintenance while prolonging the working life of your roads and infrastructure. So wherever you’re driving — be it a village road in Senegal or a U.S. interstate — Midwest is at the ready to help you combat dust.