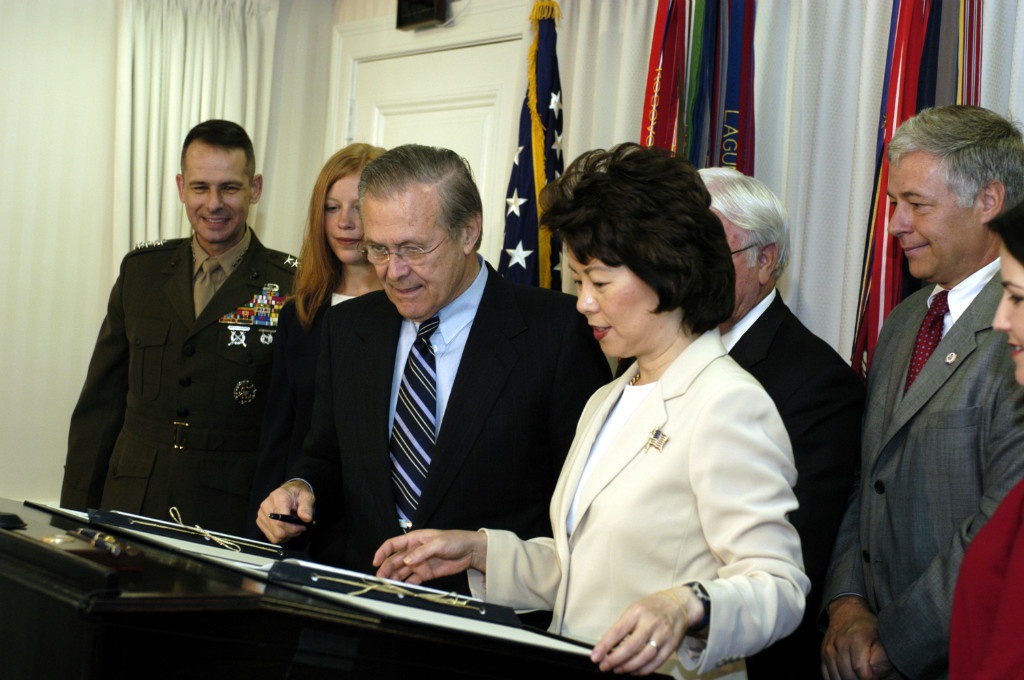 President-elect Donald Trump’s cabinet is starting to take shape. Most recently, he nominated Elaine Chao to serve as Secretary of Transportation.

The PEOTUS has now made the vast majority cabinet nominations, and his selections have ranged from seasoned experts like James Mattis to more recent entrants to the political world, like Ben Carson. Recently, Trump named Elaine L. Chao — who is anything but a novice — to serve on his cabinet as Secretary of Transportation. By selecting Chao, Trump doubled down on his promise to make infrastructure development a priority in his first 100 days.

“The President-elect has outlined a clear vision to transform our country’s infrastructure, accelerate economic growth and productivity, and create good paying jobs across the country,” Chao said. “I am honored to be nominated by the President-elect to serve my beloved country as Transportation Secretary.”

This will be Chao’s second stint as a cabinet member. She served as the 24th Secretary of Labor for all eight years of George W. Bush’s administration, becoming the first Asian-American woman to be appointed to a President’s cabinet. Bush was the third Republican President under whom Chao had worked — she was the recipient of a White House Fellowship during the Reagan Administration, and she was appointed by George H.W. Bush to serve as Deputy Secretary of Education in 1989. After serving in that role, she was made Director of the Peace Corps from 1991 to 1992.

Chao’s experience in the transportation industry goes far beyond public service and into the private sector. Following her government service, Chao served four years as the CEO of United Way of America, reestablishing the organization’s credibility and contributing to the return of public trust after former United Way President William Aramony was charged with defrauding the organization.

Chao has also been married to Senate Majority Leader Mitch McConnell since 1993. Since the Senate is required to confirm all cabinet nominations, McConnell will have a vote on whether or not his wife should serve as Transportation Secretary — and he has confirmed that he will indeed be making that vote.

“I’ve heard rumors that it should be an outstanding appointment,” McConnell said during a Senate news conference. “Someone actually asked [spokesman Don Stewart] if I was going to recuse myself. Let me be quite clear: I will not be recusing myself.”

A Long History with the Rail Industry

The rail industry as a whole responded positively to Chao’s nomination, and many prominent figures in rail transportation cited her previous experience with transportation in their public statements.

“The nation’s rail industry welcomes the President-elect’s selection and looks forward to working with Ms. Chao on the many critical surface transportation issues key to U.S. economic growth and prosperity,” said President and Chief Executive Officer of the Association of American Railroads, Ed Hamberger. “We know based on her prior tenure at the Department of Transportation that she has a full appreciation of the vital role freight and passenger rail play in America.”

American Short Line and Regional Railroad Association President Linda Bauer Darr added to the sentiment, noting that “Ms. Chao brings a depth of varied hands-on transportation policy experience to the table. Under her leadership, we look forward to working with the DOT on issues of importance to the railroad industry, such as limiting and reversing harmful over-reaching regulation, balanced investment in the national freight transportation network, a strong commitment to safe and efficient rail operations, and support for permanency of programs like the 45G railroad rehabilitation tax credit that combines two key priorities for President-elect Trump: infrastructure growth and common-sense tax reform.”

Maintaining Safety on the Railroad

Passenger rail initiatives will certainly be a key element of the redevelopment of American infrastructure. And as the nation tackles these pursuits, safety should always be a top priority. Midwest Industrial Supply Inc. is an industry leader in rail maintenance and safety, offering a range of patented solutions for railway operators such as anti-icing and deicing and rail lubrication products.

If you want to keep your operation safe and on-schedule, look no further than Midwest’s Zero Gravity Third Rail®. This environmentally-friendly product was co-developed by Midwest and the NASA/Ames Research Center to prevent costly delays as a result of power loss and stalled trains. Because Midwest knows that the safety of your passengers is a top priority, we deliver tailored solutions to ensure your railway’s reliability and long-term durability.