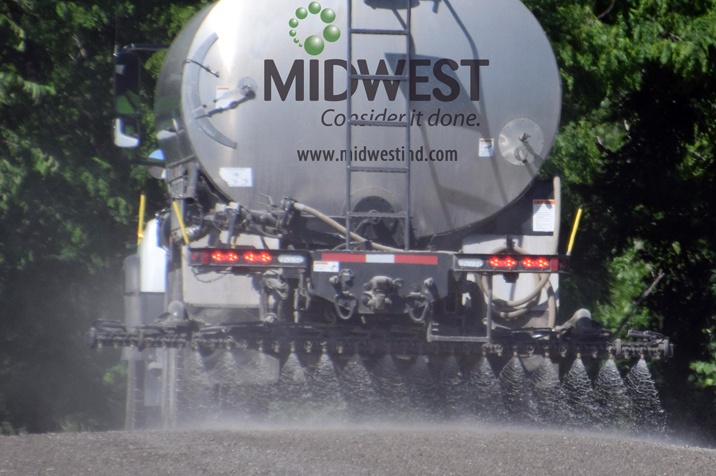 The Alaska DOT&PF operates almost 300 remote gravel runways for commercial, charter and private air traffic. One of the DOTs’ needs in operating these runways is to minimize the gradual loss of vital fines. These fines are one of the sources of fugitive dust that impacts the health of neighboring populations (e.g., U.S. EPA PM10 and PM2.5 requirements) and aircraft operations. Any approach taken to preserve runway fines must minimize the environmental impact on the local ecology and leave aircraft surfaces undamaged. This must be accomplished with local gravel sources, local construction equipment, minimum manpower and severe winter weather.

The rehabilitation methods have been documented and successfully used over a 5-year period on gravel runways in both Alaska and Canada (e.g. the Northwest Territories & Quebec). These methods use Midwest’s EK35®, a fluid – binder system, applied to the gravel to primarily bind the surface together and secondarily increase the bearing capacity (CBR). EK35 is typically applied at a rate of 1 gallon for every 40 square feet (1/40). The improved strength is sustained for 1 to more than 3 years without maintenance through the binding effects of the fluid on the gravel surface. Consequently fines are preserved, gravel stays in place and dust is controlled to minimal levels.

Also, loose gravel due to the effects of weather and aircraft loading cost air carriers tens of thousands of dollars annually in engine and airframe damage. An additional objective for the DOTs is the development of fines preservation methods that hold the gravel in place for years with minimal maintenance.

Midwest has assisted the AKDOT&PF in developing fines preservation methods for gravel runway rehabilitation and maintenance per DOT dust reduction, environmental and chemical requirements. These methods have been provided through local contractors who are trained by Midwest, experienced in the methodology and intimately supported by Midwest.

Maintenance, when it does occur, has involved the reapplication of EK35 at a typical rate of 1 gallon for every 120 square feet (1/120). Preventative maintenance can be performed at the same 1 to 3+ year interval, depending on the type of gravel and the state of runway bearing capacity. EK35 has been applied to 19 gravel runways operated by the AKDOT&PF since 2001.

A good example of what is possible is illustrated by the EK35 application to the runway at Tanana, AK in the AKDOT&PF’s Northern Region during 2007 and 2008. The runway is 4,400 ft. long by 150 ft. wide, with the center 90 ft. (between landing lights) being used for air traffic. The runway is constructed of silty, sandy gravel. In 2007, the runway received a 1/40 EK35 topical application over its center 90 ft. In mid 2008, the runway received a 1/120 EK35 reapplication over its center 50 ft. when surface conditions were observed to be changing, but not significantly enough to affect dust levels or aircraft operations.

During the last few years, EK35 has been independently certified to reduce PM10 dust emissions by greater than 85% and PM2.5 emissions by 60% after a 1 year period after application and without maintenance. EK35 was also independently certified to be non-injurious to aircraft surfaces when used as a stabilizing agent and dust suppressant by the Boeing Company per their specification D6-17487, “Evaluation of Aircraft Maintenance Materials”. In addition, EK35 was independently demonstrated to have negligible environmental impact in regard to meeting U. S. EPA guidelines for bulk constituents,
polynuclear aromatic hydrocarbons, TCLP regulatory levels for metals, volatiles, semi-volatiles, pesticides and herbicides and aquatic toxicity.

The AKDOT&PF and pilots using the runway deemed its performance in the time since the initial EK35 application to be excellent. This included dust reduction, FOD and environmental performance. As an added value, the EK35 applications sustained sufficient structural integrity of runway surfaces to serve the aircraft using the runway, thereby assuring passenger and aircraft safety.