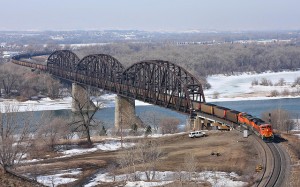 There is simply no denying this year’s extreme weather with record highs and lows in temperature. Climate change is at our front door and so is the need for forcing our industries to make the necessary changes to their practices. The mining and power industries are no exception.

Southeast Montana and Northeast Wyoming meet at the Powder River Basin–a 120-mile wide and 200-mile long geological structural basin. It’s a major coal deposit. Daily Climate quotes University of Montana professor, Thomas Michael Power, as saying that “no other coal seam on the planet is so big, so close to the surface, and so cheap to mine.” These nearly perfect mining conditions allow PRB to account for 40% of the United States’ coal supply, dominating the scene after the 1990 Clean Air Act amendments because of its low-sulfur bituminous and subbituminous coal. A majority of the coal mined from this basin goes to American electrical needs, but the harshest winter in over a decade nearly brought PRB mining to a literal standstill.

Mining depends on rail to transport coal out from the basin. The severe conditions of last winter impeded rail travel. Record low temperatures affected air brakes, so trains were shortened, capped at 125 cars instead of the usual 136. “Snow short-circuited electric motors, froze switches and kept crews from reaching locomotives” says Wood Mackenzie’s report. To top that off, coal also froze, which slowed the process of getting coal off the train cars.

A June 19th short-term energy outlook from the U.S. Energy Information Administration predicted a shortage of 108 million tons (MMSt) of power sector coal inventories for August 2014.  In most cases utilities cut back on coal to save up for the summer months, opting to use twice as costly natural gas, though emitting only half of the usual amount of greenhouse gas. Because most plants are built to burn only one type of coal, turning to another basin’s coal is not an option. David Jackson, Portfolio Manager at the Philadelphia-based Penn Capital Management said, “Coal producers are definitely constraining the amount of volumes they are able to bring to market.” To deal with the climate, railroad operators are buying locomotives and building additional tracks to aid in train travel and ease the hold-up, an expenditure of $5 billion–but analysts and investors foresee problems lasting the rest of the year, and experts recommend that corporations look into anti-icing and deicing solutions.

Be Prepared for the Approaching Winter

The Old Farmer’s Almanac predicts that the 2014-15 winter will be another arctic blast with above-normal snowfall throughout much of the nation. Midwest Industrial Supply, Inc. has a variety of anti-icing and deicing products that serve both the rail market and the coal handling markets.