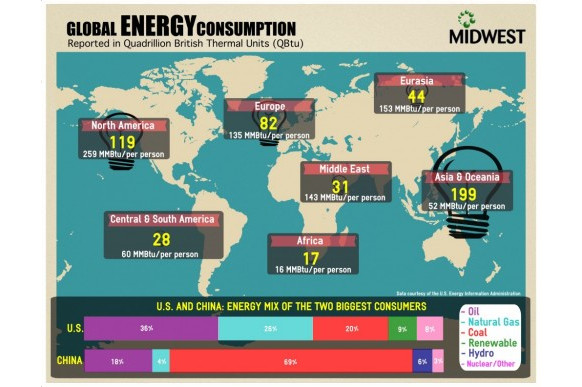 For some time now I’ve been greatly concerned with the global population’s rapidly growing energy needs and our present failures to meet them. Then I stumbled across this fascinating new video on Extract, the World Coal Association’s official blog, and my concerns only deepened.

I want to quickly share with you some of the essential facts I gleaned from this informative little video. I sure didn’t know before that every single day:

While these numbers are staggering in their own right, the most important takeaway from this short video is how interconnected the seemingly unconnected worlds of coal production and technological advancement really are.

Most of us probably don’t think about coal every time we log onto Twitter, move to a new city, or even turn on the lights. But we should, because none of it would be possible without the power of coal.

While it’s easy to leave decisions over mass coal mining, production, and conversion into usable energy to heads of state and CEOs, the fact of the matter is that we all need to be aware of coal’s place in our lives and involved in its expansion as an industry.

The frightening truth is that we’re going to soon face a major power shortage on the global scale if we don’t invest our time, energy, and resources in growing production.

With global energy demand set to increase by 33% by 2035, supply must correspondingly proliferate or we’ll all be left in the dark. And to be clear, an energy deficit cannot be made up by any available means. Coal does so much more than turn on our lights and power our manufacturing plants.

Unlike wind and solar, it forms the material basis for commercial technology products like iPhones and laptops, as well as the infrastructure of the world’s cities.

India is primed to become the world’s leading exporter of coal in the next decade or so. While we should encourage the evolving Asian country’s growth into an energy powerhouse, we should also be alarmed of the development’s implications for the United States’ status as a world energy producer.

Furthermore, all the highly developed and high-income countries claiming membership to the Organization for Economic Co-operation and Development (OECD) need to reconsider their diminishing investments in the worldwide coal industry.

With over one billion people still lacking access to electricity, contributions to expanded energy production can’t come from non-OECD countries alone. Although these nations–primarily in Asia and Africa–currently suffer from the greatest lack of energy access, that promises to change if the rest of us don’t pick up the slack.

While our friends across the globe are smartly investing their resources in meeting the energy demands of tomorrow, and while we continue to invest in renewable energy, we can’t forget coal! We know what we have with coal, which is a consistent and cost-effective wellspring of power, and we should not turn our backs on the very urgent needs of generations to come.

A firm commitment from the U.S. government to heavily invest in the domestic coal industry would go a long way towards ensuring that the rest of OECD follows suit. We must all hope that commitment comes soon, as it is the only way that future populations will continue to enjoy the bright lights and brighter technology that the world and its cities have to offer.