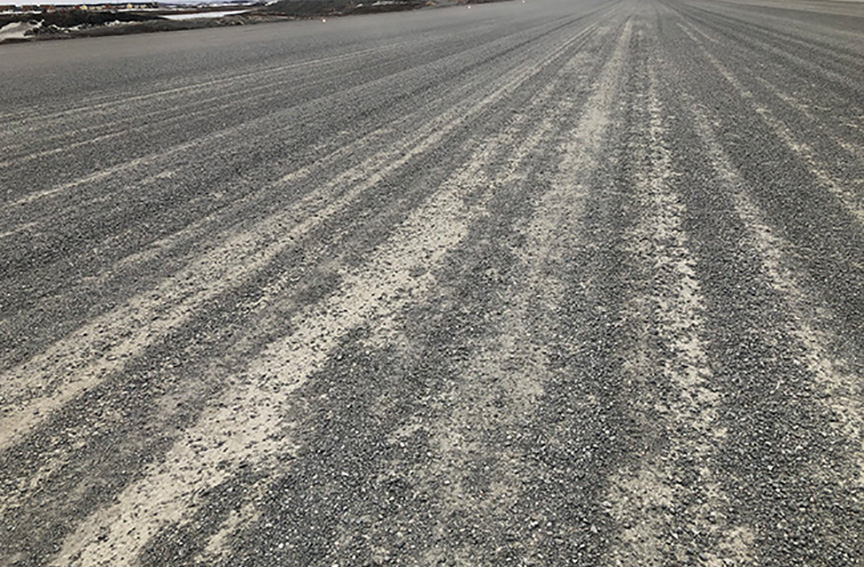 The unexpected cost of operating aircraft on gravel airstrips

Remote unpaved runways and their operators face a multitude of unique issues due to the characteristics of the gravel material used, climate and seasonal impacts, geographic location, available resources and equipment and performance requirements. One of the particularly challenging issues is the risk of damage to an aircraft resulting from Foreign Object Debris (FOD). Loose FOD can damage tires; strike the fuselage, propellors or other components; or be ingested into the engine. Due to the high risk of damage, most aircraft manufactures do not provide warranties for aircrafts operating on unpaved gravel airstrips, leaving the burden on the airlines and runway owners.

[Above] Figure 1: FOD in the form of loose gravel on the runway surface, which is typical of untreated gravel runways.

The direct cost of FOD-related damage are a constant challenge to carriers ranging from as low as tens of thousands of dollars to easily exceed one million dollars, not to mention the indirect costs associated with flight delays, aircraft changes, unscheduled maintenance, etc.  More importantly than the significant economic impact that FOD can have on an airline, FOD poses serious safety concerns and, in rare cases, can even result in aircraft failure, leading to the possible injury or even death of passengers and pilots.

Besides impacting aircraft surfaces, systems, tires and propellors, untreated runway surfaces also impact an aircraft’s steering, braking, takeoff and landing distances and performance. Potholes, rutting, wash boarding, loose gravel/FOD and water pooling/ponding all contribute to challenging conditions and, in some cases, risks that pilots must assess and be aware of while operating from untreated gravel airstrips. Aircraft operating from gravel airstrips require added care and inspection, especially to propellors and tires which wear and are damaged more easily than on paved surfaces.

In the past, certain manufacturers equipped their aircraft with gravel kits to provide added durability and protection when operating on unpaved runways. Gravel kits are structural modifications to an aircraft to avoid/minimize FOD damage or ingestion while operating on unpaved surfaces, allowing larger aircraft, such as the Boeing 737, to land on unpaved surfaces. They help to mitigate the impacts loose gravel and dust have on aircraft. These modifications generally include deflectors, vortex dissipators, shields and reinforcements—all designed to prevent damage to the engines, underside of the fuselage and the wings. Gravel kits have been vital to protecting aircraft, keeping pilots safe and avoiding costly repairs.

However, in recent decades, aircraft manufacturers have discontinued the installation of gravel kits on new aircraft and have almost entirely phased out older aircraft that were equipped with gravel kits. [Citation?] This is a major and costly problem for carriers, by making newer aircraft more vulnerable to FOD.

The extent of FOD-related aircraft damage from gravel runways

Newer aircraft operating without gravel kits are highly susceptible to costly damage from loose surface particles ranging in size from as small as 1 millimeter up to 3 centimeters and larger.

FOD-related damage from gravel airstrips is a prime cause of maintenance and repairs in aircraft engines. Early Boeing research found the costs associated with this type of damage to be estimated at around $4 billion annually for the civil aerospace industry.

The cost to repair a FOD-damaged engine alone can easily exceed $1 million, or more than 20% of its original purchase price.

However, a later study conducted in 2010 (see citation and more data below) found that the direct and indirect costs (from both FOD and bird strikes) is closer to $13 billion—and this from over a decade ago.

In a study by Insight SRI in 2008, researchers found that indirect costs often equal 10-13x the direct costs. Indirect costs listed by the report include:

(This research studied large airports, meaning not all items will be relevant to rural, gravel runways. However, if anything, rural runway operators should consider these numbers with concern, because gravel airstrips by their nature create far more FOD directly from airport infrastructure, meaning rural runway operators are more likely to be held liable and less likely to be able to afford the hit to their bottom lines.)

In the 2010 paper mentioned above, by the same authors as the 2008 study, an attempt was made to approach these costs from a bottom-up approach, in contrast to the top-down model that has primarily informed data collection on these numbers. In this paper, the researchers found that the cost of FOD per 10k movements was $32,333. Nearly 80% of this cost was due to engine strikes, while the rest were tire strikes (see page 146).

The study confirmed the finding that indirect costs are 10x direct costs and valued on-runway strikes alone as costing $7 billion, or over half of all damage costs.

Through our own conversations at Midwest with airlines and operators from around the world, we’ve heard many stories that verify the impact of FOD on aircraft damage from gravel runways.

All of this clearly presents a huge cost to airlines. But how does it affect you as the runway operator?

As alluded to in the list of indirect costs to airports, there are several ways that aircraft damage from gravel runways can come back to bite your bottom line.

Regulations, fees and liability are the most obvious examples.

But another problem that is harder to quantify is the loss of business. Airlines depend on you, the runway operator, to keep your runway in top shape. If repeated FOD-related instances are occurring, that airline may decide to move their operations to the next nearest airport.

The loss of direct income is compounded by a drop in tourists (where relevant) and more expense in bringing goods into your community. Especially for rural villages and towns who rely on the transport provided through your gravel runway, this can create serious problems.

Assuming you are taking the risk of FOD damage caused by dust particles and loose gravel seriously, you also need to consider the costs of keeping your runway in top condition. From maintenance (such as grading, packing, watering and repairs) to replacing aggregate to labor, inspection and dust control, there’s a lot that goes into your maintenance schedules, plans and budgets. Being as effective as possible with your resources, tracking the right metrics and managing your investment in your runway for the long haul are all important steps in managing your costs and minimizing the risk of FOD-related aircraft damage from gravel airstrips.

So how can you get the best results for the most reasonable gravel runway maintenance costs?

The best way to reduce aircraft damage from gravel runways

It’s all about managing your runway surface at the molecular level, something that Midwest has been specializing in for decades.

Midwest’s EK35 is a patented synthetic fluid with a binder system engineered to stabilize unpaved runway surfaces. Unlike dust palliatives which do not improve the engineering properties of the runway, when topically applied or constructed into the upper 4-6” of the runway surface, EK35 creates a durable, hardened runway surface free of loose gravel and FOD. As aircraft equipped with gravel kits are being removed from service and jet traffic is being introduced, EK35 becomes the ideal and only solution for preventing FOD-related aircraft damage from gravel runways.

The improved performance is a result of EK35’s unique binding chemistry and innovative installation techniques. First, the EK35 synthetic carrier fluid delivers the binder into voids in the soil and aggregate. As the EK35 fluid is incorporated into the surface course, it uniformly coats all the soil or aggregate particles with its adhesive agent. The binder then physically bonds permanently to the particles via a chemical reaction. This adhesion to each soil or aggregate particle, and then the binding of all separate particles together, prevents dust emissions and fines loss. These fines are retained in the surface, where they are necessary to keep larger aggregate in place. Over time, traffic loading further tightens the surface using cohesion and adhesion mechanisms, thus increasing the CBR value, performance and longevity of the runway. A properly installed EK-35 improved and maintained runway will virtually eliminate the creation of dust, loose gravel, rutting, wash boarding and potholes while also eliminating the need for any grading, a major maintenance procedure on untreated gravel airstrips.

EK35 has been topically applied on dozens of gravel runways across North America, including in Alaska, Manitoba, Alberta, Yukon, Northwest Territories, Ontario, Saskatchewan and Nunavut. At a small fraction of the annual maintenance and repair costs related to FOD damage, the benefits to carriers, and therefore to you as a runway operator, in terms of savings and safety is very significant.

To discover the results that Midwest’s EK35 can achieve for your gravel runway, reach out to us today.