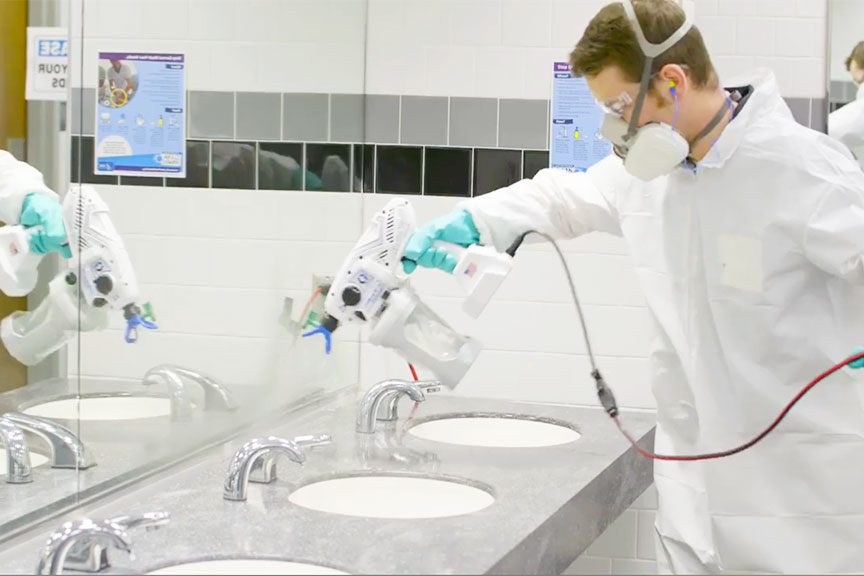 As you choose a disinfectant for your office, school, large venue or for any other application, it’s important to choose a safe disinfectant. Safety is, of course, a top concern in choosing what product you’ll use in your cleaning and disinfecting program.

Consider these three perspectives on selecting a safe disinfectant as we deconstruct each type of disinfectant category shown below:

We break down the categories of disinfectants that are most popular AND meet the minimum requirements to appear on the EPA’s N List.

If your response to seeing “aldehydes” makes you think of high school biology lab and formaldehyde-filled carcasses, you aren’t wrong.

This category (particularly ortho-phthalaldehyde, which is both more effective and safer than the other options) is ranked highly for efficacy. A report from hospitalmanagement.net (a healthcare data resource) lists these as high-level disinfectants.

But, as you can probably guess, they are toxic. So they fail our by-product test, and therefore are not a safe disinfectant. Due to its exposure hazards and known carcinogenic properties, most hospitals and healthcare settings have moved away from them to peracetic acid and hydrogen peroxide mixes.

Ethanol and isopropyl. These are listed as a safe disinfectant category on many lists. However, their efficacy levels are only about moderate, with a number of cases in healthcare settings where infections were introduced because of the failure of alcohol to adequately disinfect.

Additionally, alcohols are only effective at over 60%. This higher volume (lower dilution rate) makes alcohol a less efficient option, both for volume needed and for costs.

(Any ready-to-use disinfectant product that does not require dilution will cost much more per gallon applied. If you compare two products that cost the same per gallon, but one needs to be diluted and one doesn’t, the diluted one spreads the cost out across more surface area. You can see how this works with our calculator.)

Povidone-iodine, specifically, has a decent level of germicidal efficacy while having less toxicity and irritancy than straight iodine. Iodophores (“iodine-releasing agents”), like Povidone-iodine, were developed to compensate for the irritancy, staining action and instability of strait iodine.

However, iodophores are less effective against certain fungi than straight iodine. The hospitalmanagement.net report mentioned earlier lists it, along with sodium hypochlorite (bleach; see below), as an intermediate-level disinfectant. A safe disinfectant? Perhaps. Effective? Somewhat.

Phenols and quaternary ammonium compounds are both considered low-level disinfectants by the hospitalmanagement.net report.

There is concern about using phenols in nurseries due to raised bilirubin levels in infants exposed to the disinfectant. This implies a toxic effect after application, meaning a post-clean step should be utilized.

Further, while only 6-8% of calls to poison control related to phenol exposure result in moderate to major clinical effects, those effects can be quite severe. Exposure can occur through inhalation or dermal contact; one source states “Phenol distributes widely and with severe toxicity, result[ing] in pathologic effects involving most organ systems.” This one fails our safe disinfectant litmus test as well.

Quaternary ammonium compounds, or “quats” as they are popularly known, are irritants to the skin and lungs. They have been identified as the cause of respiratory conditions and occupational asthma in farmers and cleaning workers.

Finally, there is evidence that the widespread use of quaternary ammonium compounds actually stimulate resistance amongst certain microbes. And as these microbes gain resistance to quats, they have also shown signs of being resistant to other disinfectants as well, compounding the problem.

Bleach has a good level of efficacy as a disinfectant. It is the best, and virtually only, solution for reducing C difficile infections in hospital settings.

But the problems with bleach are well known. Concentrated bleach is corrosive to the skin, eyes and lungs. The Association of Occupational and Environmental Clinics (AOEC) lists it as a respiratory sensitizer and asthmagen.

It’s also corrosive on many surfaces and can easily be misused – creating problems with the dilution level, or even mixing with other cleaners and creating toxic, life-threatening fumes.

In water treatment, it’s known to produce a range of carcinogenic substances, such as trihalomethanes.

Ultimately, bleach sounds like an easy, convenient and even cheap option. But there are active ingredients that are as or more effective, can be applied more affordably and are safer. Don’t settle for bleach just because it’s popular.

While either of these two substances can be and often are used individually, combining them maximizes efficacy. Peroxyacetic acid, or peracetic acid, is highly effective against a wide range of microbes, but is unstable. Together, they make a potent, yet environmentally friendly, alternative.

Together, this mix was found to have even higher efficacy than glutaraldehyde (it kills glutaraldehyde-resistant mycobacteria). Whereas every other section in a CDC report on chemical disinfectants has a long paragraph describing exactly what each category is effective against, in the section on this mix, it simply states, “Manufacturer data demonstrated this combination… inactivated all microorganisms except bacterial spores within 20 minutes.”

Peroxyacetic acid and hydrogen peroxide are also incredibly safe after application. They simply break down into vinegar, water and oxygen. This means there is no toxic by-product left behind on surfaces that need to be post-cleaned. (Unlike several of the above chemicals, like bleach. The need to post-clean surfaces adds to the cost, time and hassle of your disinfecting program.)

Because of concern about the by-products of using bleach in water treatment, the EPA tested a peracetic acid/hydrogen peroxide mix. The results of the study were that PAA (peracetic acid) is a fast-acting, effective disinfectant that leaves no residue. Given that the costs were comparable, or better, the peracetic acid was a clear winner against bleach.

Despite the safety benefits  after application, however, the problem arises during use of the disinfectant. The AOEC ranks peracetic acid as an asthmagen, despite the fact that both hydrogen peroxide and acetic acid (vinegar), its active ingredients, are completely healthy. (Find their tool here and search for hydrogen peroxide.)

There are some cases of cleaning workers in healthcare settings reporting occupational asthma symptoms after exposure to peracetic acid/hydrogen peroxide. Other sources have been a little more skeptical of the seriousness of these symptoms. A CDC report from the field suggests engineering and administrative controls to address any problems (in other words, focus on correcting the cleaning environment).

Further, the EPA acknowledges the potential risk to skin and eyes, but says that “These risks are minimized, however, through the use of protective equipment, as required by product labeling. Therefore, the risks to humans are considered negligible.”

In 2015, the EPA added peracetic acid to its Safer Choice list. In the Antimicrobial Actives category, this ranks it with hydrogen peroxide, the alcohols and lactic acid.

The literature used as the basis for this study found the following results:

The point of this discussion is that the peracetic/hydrogen peroxide mix might be the most debated of all disinfectant active ingredients in terms of its safety. There are obviously some risks, but these risks can be easily mitigated.

And when you integrate the three levels of safety we discussed earlier (during application, post-application by-products and efficacy), the peracetic acid mix certainly rises to the top.

At Midwest, our focus is always on developing products that best integrate safety, effectiveness and affordability. That’s why we created our Midwest Disinfecting System, including Proxitane® AHC as our disinfectant.

Proxitane® AHC is a peracetic acid/hydrogen peroxide mix. (It also contains a detergent to eliminate the need for a separate pre-clean step.)

On top of the efficacy and safety benefits listed above, we’ve also found a way to provide this to you at a total cost far below what you would pay for any other option. You can use our calculator to confirm that claim).

You won’t find another product on the market that combines Proxitane® AHC’s efficacy levels, post-application safety and low total cost of application.

Unfortunately, there’s not a lot of clarity and agreement in the sources when it comes to the safety of various common active ingredients. For example, one source advises against using thymol (derived from the cooking herb thyme) due to its rating as a respiratory and skin sensitizer. (A sensitizer is basically the next level above an irritant. On the skin, it triggers an allergic reaction; inhaled, it creates asthma-like symptoms.) Another one, however, includes it on a list of safe disinfectants.

In reality, there are a large number of factors to consider when it comes to choosing a safe disinfectant. Even hydrogen peroxide, an active ingredient that every source agrees on being one of the safest options, is an oxidant that can be harmful to skin and eyes at heavier concentrations.

In fact, because we are dealing with concentrated chemicals, removing every potential risk factor at the first level of safety, application, probably isn’t realistic. Even if you could ensure that a product is completely safe for those applying it, the cost may be far higher than for another solution that can be protected against by simply having your staff wear appropriate PPE. (For instance, a silver-citric acid or silver-hydrogen peroxide mix. While considered safer than some alternatives, its costs are high enough that it is only recommended for limited spaces with minimal surface area.)

Then there’s efficacy. For example, although lactic acid is listed as a safer active ingredient, it has a far more limited efficacy than many other active ingredients. Your staff handling application might have less exposure risk, but you’ll spend significantly more for much less disinfection.

This might be a more complicated discussion than you imagined, but for purposes of full disclosure, it’s important to let you know Midwest takes its science seriously. Please consider our perspective a part of a wider discussion.